We would like to wish our President, his government and the Gambian people a happy and peaceful anniversary, as The Gambia celebrates the 21st Anniversary of the July 22nd Revolution.

As we celebrate this august occasion, we would also like to extend our focus on the developments registered by the government over the years, as well as its challenges to overcome.

It is gratifying to note that the Jammeh government has registered tremendous development in sectors such as health, agriculture, roads, security, education and human resource development such as the empowerment of women and youth.

Having highlighted some of the developments registered so far by the government, we would like to draw the attention of the authorities to some other aspects of great concern to the Gambian people.

Firstly, it would be prudent that robust improvement is made on the electricity and water situation of the country. The epileptic showing of electricity and power supply across the country, especially in the Greater Banjul area, is adversely affecting the development aspirations of the government and this nation.

Sport also needs to be improved upon, with the necessary financial boost and encouragement for the good of the nation, as well as roads such as those in the capital city and environs.

They are all of great necessity to national and human development in this country.

The telecommunications network, the internet especially, should be improved upon.

Talking about human rights issues, all are concerned that people are being detained for more than 72 hours, without being charged and or released.

Currently, according to informed sources, there are several people who have been detained or remanded for long time. This should not be the case in a democratic dispensation.

The judiciary should also be given all the necessary encouragement and support to do their job fairly without hindrance.

On press freedom, we would like the government to consider the press or media as partner in development, not enemies. There should be a constant dialogue between the press and the government.

Government should facilitate access to pertinent information of national interest, so as to foster better relations between the media and the state authorities, as well as between the government and general public. This, it is believed, will spur national development.

Furthermore, the government should also promote or encourage the expression of divergent views in the state media.

All draconian media laws should be abolished, so as to foster and promote ethical and professional journalism in the country.

We, however, commend President Jammeh for pardoning 85 prisoners during the month of Ramadan.

We take this occasion of the celebration of the 21st anniversary of the July 22nd Revolution to appeal to the President to grant amnesty to all those who have offended him in one way or the other. As Muslims, we should forgive and forget.

In the diplomatic field, The Gambia should always engage in dialogue with the international community, especially with our neighbours.

Our call also goes to the municipalities for them to maintain a clean and hygienic environment across the country, by ensuring that all waste or garbage deposited around our environment and the markets is regularly collected for onward disposal at the designated places or locations.

We welcome the introduction of the new buses serving the provinces, but we also need more buses in the urban areas to cover many important routes in town, especially the Banjul-Brikama and Banjul-Tabokotu routes. The people, especially civil servants and students, find it very difficult to get vehicles to take them to workplaces and schools in the morning on time.

More ferries are needed in Banjul, Barra and Yellitenda. We also need more airlines to cover the sub-region.

These and many other pertinent development aspects of our nation must be taken into consideration, and addressed properly.

Notwithstanding, we also call on the people to be law-abiding and respect authorities or the powers that be.

We pray for the peace, tranquility and prosperity of our beloved nation, as well as appeal for national unity and reconciliation.

''An anniversary is the celebration of love,trust,partnership,tolerance and tenacity.

The order varies for any given year.'' 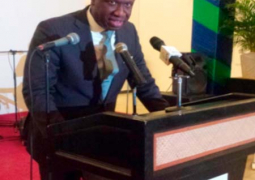