Halifa Sallah, the Director of the Peoples Centre for Social Sciences, Research, Civic Awareness and Community Initiative has emphasised the need for history to be kept alive so as to make history.

Halifa Sallah was speaking on Sunday at the launch of his book, entitled "The Road to Self Determination and ," held at the Paradise Suites Hotel.

He stressed that history is kept alive by facts and not fiction.

"History must be kept alive in order to be able to make history. History is kept alive by facts. When we keep history with facts it grows and develops, based on our deeds, but when we fill history with fiction it disintegrates and dies," he said.

According to Halifa Sallah, countries can only be called countries when they have a people. The renowned Gambian sociologist stated that there is fiction in that part of history which says that The Gambia was colonised for four hundred years.

Mr. Sallah said that people must correct their history in order to determine their destiny.

In his view, The Gambia as a nation began when a boundary commission was established and demarcated between The Gambia and , on the 10th day of August 1889. This, he added, marked the emergence of The Gambia as a colony.

"This was followed by the 1894 Ordinance on how to rule The Gambia as a colony. The colonial legal instruments divided the country into districts to be monitored by chiefs and not the kings," he added.

Still on history, Mr. Sallah reminded the public of the agreement signed between Alexandra Grant and the King of Kombo, in which the king has a right to receive 103 bars for their using of . This, according to him, was a clear testimony of the existence of states, kings and their sovereignty.

Mr. Sallah stated that the colonialists engaged in trade, but also tried to exploit the states by engaging them in wars, supporting weaker nations against the stronger ones.

This resulted in many intense wars, in the period 1850-1894, which also led to the defeat of Foday Kaaba Dumbuya in 1902, who was the only surviving strong king resisting colonialism.

"This paved and eased the way for colonialists to expose their might on the people, and colonise them. Musa Molloh Baldeh was tricked into signing a treaty which stated that his state was part of the colony, but he thought he was only signing for his protection and safety from French exploitation, on the 7th of June 1901", he added.

He mentioned further that The Gambia never received independence on a silver platter, but rather the people's awareness led them into asking for and having their independence. He said the awareness and organisation of the people is mightier than the gun, quoting Edward Francis Small, who was seriously engaged in enlightening the people in his Gambia Outlook Newspaper, established in 1922. This led to more demands for representation, but the colonialists gave a deaf ear to these calls, he added.

Sidia Jatta, the National Assembly Member for Wuli West, also a colleague of Halifa Sallah, pointed out the key areas of the book, saying that the book tells you that The Gambia's status as a sovereign independent state started in April 1970.

"The book also tells you how Edward Martins Francis Small paved a way for the people to achieve self-government," he further stated.

The book, according to Sidia Jatta, "tells you the developments that happened in the period 1970-1994, and it further tells you the aftermath of the coup in 1994 running down to the Second Republic and up to date.

The book also talks about the way forward for the country."

Mr. Jatta described the book as "an encyclopaedia," noting that it can serve as a resource for historians, philosophers, economists, political scientists and even jurists.

Lamin K. Marong, the Principal of the , who is also the President of the Gambia Teacher's Union, chaired the occasion.

The activities to mark the launching of the book included drama shows and performances by cultural groups, and students of . 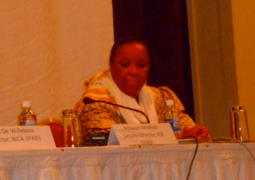