The remanded UDP Campaign Manager, Mr. Peters was yesterday released on a bail bond of D500, 000.

Mr. Peters, who is charged with two counts of "control of procession and control of loud speaker was on Wednesday remanded in custody by a magistrate court in Banjul after pleading not guilty without his lawyer.

The particulars of offence on count one states that, Mr. Peters, on 24th October 2009, after failing to obtain permission from the Inspector-General of Police proceeded to hold a political rally in Serrekunda Central, and on count two it states that the same day and time he used a loud speaker to be heard in a public place without the written consent of the Inspector-General of Police.

He asked whether it means that anyone who applies for a permit commits an offence.

Lawyer Darboe added that, the territorial link as to where the offence was committed is clearly spelt out, maintaining that the rally in question was not held in Banjul, but in Serrekunda, which falls within the jurisdiction of the Kanifing Magistrates’ Court and thus applied for the case to be transferred.

He informed the court that if his application was not honoured, he would have no other choice but to go to the High Court.

Hence he argued that the Banjul Magistrates' Court lacks the jurisdiction to hear the case. He observed that filing an application to the Inspector-General of Police in does not mean that the alleged offence was committed there.

In response, the Prosecution Officer in the case, Inspector Fadera told the court that he totally disagrees with the Defence Counsel's submission that the Banjul Magistrates' Court lacks the jurisdiction to hear the case.

For him, the court has the jurisdiction to hear the case, and urged the court to allow him to call his witnesses.

At this point, the Presiding Magistrate, Emmanuel Nkea adjourned the case to 5th November 2009 for ruling. 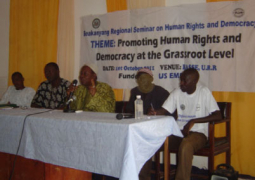 URR youths, others trained on human rights and democracy