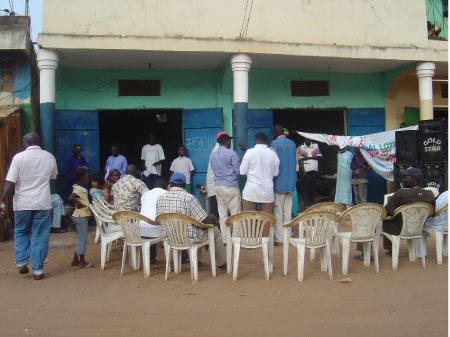 Some new staff quarters for Gunjur Health Centre in West Coast Region were recently inaugurated at a ceremony held at the health post.

Speaking on the occasion, Alagie Sankareh, a representative from the Ministry of Health and Social Welfare, applauded Kaira Su Federation for their immense contribution towards the health sector.

The gesture, he said, would complement government`s efforts in health service delivery.

He noted that the new staff quarters would reduce the accommodation problem in the health centre.

Sankareh urged them to continue giving more support to the health sector.

Juma Jallow of the regional health team said accommodation for nurses is a problem and the staff quarters will aid the nurses and encourage them to stay inside the health centre to do their work effectively. “It as well aids them from outside renting,” he said.

The village head added that the new staff quarters would boost the morale of nurses posted at the health facility.

Omar Chaw Barrow, a member of Kaira Su Federation Board, urged the staff to redouble their efforts in their work and make the best use of the new facility.

The manager of the federation, Lang Dibba, said: “Kaira Su Federation is proud to inaugurate the new staff quarters at Gunjur Health Centre.”

Kaira Su Federation injected about half a million dalasi into the project, he added.

He also revealed that they have a skills training centre in Sanyang village where people can learn computer skills, tie and dye among other skills.

He further revealed that plans are in the pipeline to build a labour room in Jambanjelly, whilst expressing optimism that Kaira Su would continue to render more support to the communities in Kombo South.