The people of Guinea Bissau last Friday woke up to reports of a coup attempt by some group of soldiers, who reportedly arrested Prime Minister Carlos Gomez and Interim President Raimundo Pereira.

This news, which comes less than a month after soldiers in Mali also toppled the government of President Amadou Tumani Toure is, no doubt, disturbing not only to Guineans, but also to the sub-region and the African continent, in particular.

No doubt, it has attracted serious condemnation from the regional bloc ECOWAS and the African Union, which announced yesterday that it has suspended the membership of Guinea Bissau from the continental body.

Guinea Bissau is no stranger to political violence. Its political history has been mired in intrigue, cold calculation and outright violence, since its political independence from Portugal.

As we have consistently indicated in this column, coup d’etat is a treasonable offence, and an unacceptable means of changing a government.

As we have seen and heard, these may take the form of sanctions, shying away of investors, setback in the democratic process, instability, among other consequences.

For this reason, all coup plotters, successful or otherwise, should be made to pay for their crimes against their people.

The regional body ECOWAS and the African Union should be especially alert to the happenings in Guinea Bissau, and nip any threat to national security and peace in the bud.

As we stated on these pages recently, if Guinea Bissau is allowed to be a failed state, the consequences for the sub-region would be incalculable.

We should all be concerned about the instability, and the state of democracy and human rights in Guinea Bissau, whose army, we believe needs to be professionals who put the interest of Guinea above their personal and selfish interest.

“Power to the people! Down with coups!” 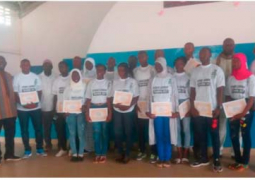