On Monday an attempted coup was reported again in the West African country of Guinea Bissau.

It is evident that the country is now becoming too problematic for the sub-region and the world at large.

Apart from the constant breach of the peace in the country through coups and attested coups, elements of the military in Guinea Bissau are also labelled as participants in what is a major transit hub for drug traffickers to Europe and .

With the latest report from the poor country, it seems the political instability that has pushed the country backward is still the order of the day.

Indeed, Monday’s reported attempted coup, based on the reports monitored on the international media, is an unfortunate development. While some reports said it was by soldiers demanding for more pay, others said armed forces fractions were fighting for control of the drug smuggling trade.

Whatever the case, many in Guinea Bissau feel the soldiers should allow peace to prevail in their impoverished nation.

Our advice to our brothers and sisters in the neighboring nation is that they must learn to accommodate each other, love their country and obey their leadership.

They must also join hands to fight against drug trafficking.

Since no outsider would go and develop the country for them, Bissau Guineans must work towards developing their nation themselves.

The soldiers should remain in their barracks, and defend their nation against external aggression and not become the troublemakers, as alleged in some media reports.

Soldiers in the poor West African nation should learn to be more professional, and not be a source of unrest. 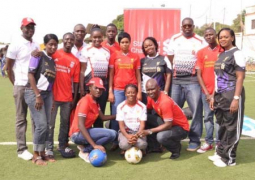