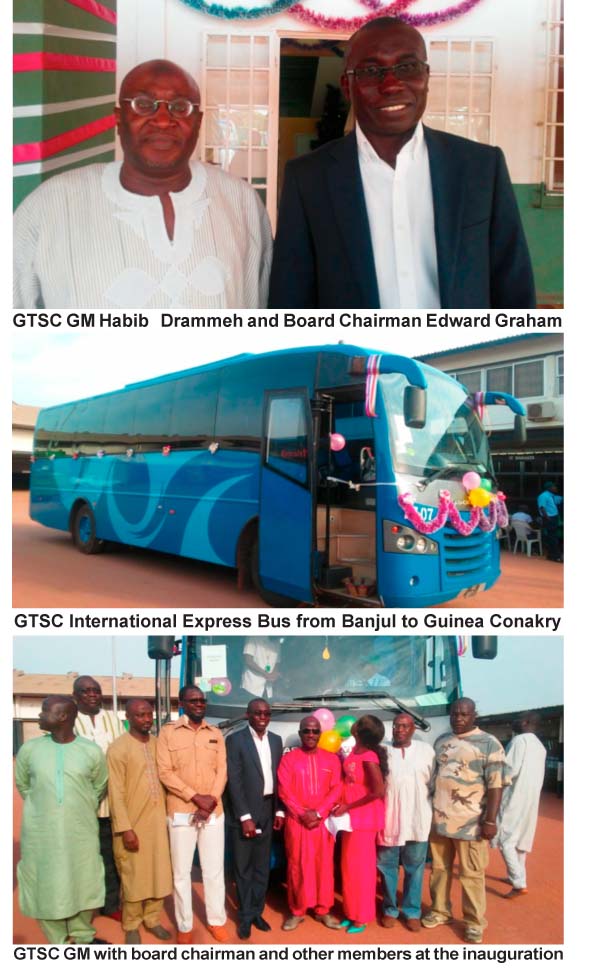 The Chairman of the Board of Directors of the Gambia Transport Service Company (GTSC), Edward Graham, and the General Manager of the company, Habib Drammeh, have both reassured their customers and the general public of an effective, reliable, safe and affordable international express bus service that the GTSC has put in place, to run from Banjul to Koundara in Guinea Conakry.

They gave the reassurance during the official launching of the Maiden International Express Service bus, held at the GTSC head office in Kanifing, on Sunday 8 January 2017.

The new product, which has a capacity of 44 seats, is equipped with A/C and fans, free refreshments (free snack and drink), in-bus video for entertainment, spacious comfortable seats, first-aids kits, experienced staff and with fast service.

The objective of the new product is to offer a reliable and affordable transport service to Gambians, and the general public both within and outside the country.

In his launching speech, the GTSC general manager, Habib Drammeh, said the new service was a long-term plan conceived in 2016.

The GTSC has now launched the service preparing to undertake the maiden journey from Banjul to Koundara in Guinea Conakry.

“We believe that this is in the general spirit of the sub-regional or ECOWAS cooperation, and it is our duty to contribute towards that development, as well as to ensure that people travel easily between The Gambia and Guinea, Senegal, Gambia, Mali and Sierra Leone, which is our plan,” Mr Drammeh said.

He said that with the prayers of everyone, the dream would become a reality. He thanks their customers for the support and urges them to patronize the GTSC service, which he described as “very reliable, affordable and comfortable, and with a lot of facilities.”

Also speaking at the launching ceremony was the GTSC Board Chairman Edward Graham, who is also the Managing Director of Social Security and Housing Finance Corporation (SSHFC).

Mr Graham described the event as one of the most joyful in the history of the GTSC.

This is so not only for the GTSC, but the whole country and the sub-region as a whole, he noted.

According to him, hard work, commitment and team work always achieve better result within a short period of time, and he would thank the staff, management and board of directors of the GTSC for contributing to making their dream a reality.

“We are going to expand our service to other regions, and the move is not only to maximize return on the investment, but also to ease the movement of people and goods,” he said.

He added that in easing that movement, GTSC would be contributing meaningfully towards the socio-economic development not only of The Gambia, but of the sub-region.

He thanked the board, management and staff of the GTSC for facilitating “this important stride” in the investment venture of company.

“We pray that Allah will continue to bless the company, bless the people, and bless the country so that we can all stand as one in moving the socio-economic development of the country.”

In her vote of thanks, Aji Yamundow Jagne, International Service Project Manager at GTSC, said it is the GTSC’s vision to become the best transport operator in the sub-region.

The start of the service to Guinea is the first step in turning this dream into a reality, she said.

“We will continue to ensure that we provide a safe and reliable service to all our destinations, to avoid any delay; we promise to improve and expand our service to the best standard possible to satisfy your needs and expectations,” Jagne promised.

The Guinean Ambassador to The Gambia, Nabi Ebraham Yula, in his remarks on the development, thanked the Government of The Gambia and the management of GTSC for facilitating the service, which would yield a lot of dividends in the sub-region.

When the Exotic Proves More Attractive