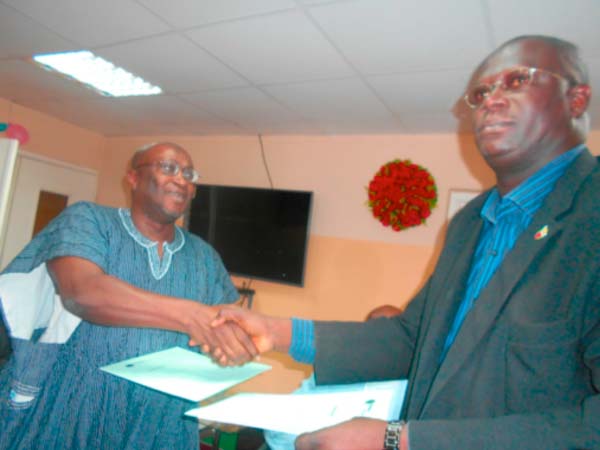 The Gambia Transport Services Company (GTSC) signed a memorandum of understanding (MOU) with the Department of Licensing and Road Transport of Guinea Bissau over the weekend at its headquarters in Kanifing.

The GTSC is dedicated to meeting and exceeding customers’ needs and expectations by providing affordable and more reliable transport for people travelling across the length and breadth of the country - from Banjul to Basse and Barra to Laminkoto.

The MOU will help to pave the way for GTSC to attain its strategic goal of expanding operations in Guinea Bissau in its drive to become leading player in the sub-regional transportation industry.

It as well opened the way to facilitate the movement of people between the two sister countries of Guinea Bissau and The Gambia.

Speaking at the MOU signing ceremony, GTSC’s General Manager Habib Drammeh seized the opportunity to formally welcome the delegation to The Gambia.

The initiative started in November last year, he recalled, saying: “We both saw business and cultural opportunities between the two sister countries, which prompted this company to explore the situation and also to cement the relationship that has  been existing between the two countries to ease the transport difficulties of the sister countries.”

He said the use of the service so far is testimony to the fact that the transport difficulties have already begun to ease.

“Our buses are well patronized in both directions and for this we want to thank our customers in both countries for placing their trust in us. In return we guarantee safe and reliable transportation,” he said.

He also seized the opportunity to thank the board of directors and management and staff of GTSC for the support and efforts rendered to ensure that GTSC lives up to expectations.

For his part, board chairman of GTSC, Mr Mohammed Manjang, expressed similar sentiments and welcomed the delegation from the Department of Licensing in Guinea Bissau under the leadership of Dr Bamba Banjai.

He said that historically the two countries share a relationship, which will be significantly influenced by the MOU.

He stated further: “The MOU will reinforce our services - started three weeks back - to ease the transport difficulties.”

He said the signing of the MOU had demonstrated once again the company’s belief in the strength of the relationship between the two countries.

The MOU, he noted, will go a long way in strengthening that relationship.

In his statement on the occasion, Dr Bamba Banjai, Director General of the Department of Licensing and Road Transport in Guinea Bissau, thanked GTSC on behalf of his government.

“On behalf of the Ministry of Transport, we really thank GTSC for all the efforts that they made to ensure our arrival in The Gambia.”

The Gambia and Guinea Bissau are sister countries, he said, adding that both parties and nations are the same family.

He said the initiative is a welcome one in both countries as it is out to help the populations of The Gambia and Guinea Bissau.

He said: “We are always ready with open hands to give all support to this initiative. We want to help our people. Today we know that transport is one of the most important elements in the development of our countries.”

He further thanked the Government of The Gambia and the GTSC while assuring them that they “will live up to expectations” in implementing the MOU.

“We are open and our doors are open to give support to this initiative. We also thank the director general of GTSC Mr Habib Drammeh and his administration and, by extension, the chairman of board of directors at GTSC, for the warm welcome accorded to us during our two-day stay in The Gambia,” he said.

PURIFICATION: b: While mentioning the name of Allah