The Board of the West African Journalists Association-Capacity Building Project based in Bamako, Mali, on Sunday December 28th, 2009 appointed Ms. Ndey Tapha-Sosseh, President of the Gambia Press Union to the position of Project Co-ordinator with immediate effect.

The board, whose membership comprises secretary-generals/presidents of the journalists unions in Benin, Cote D'Ivoire, Guinea Bissau, Mali, Niger, Sierre Leone, Senegal and The Gambia met in Bamako on December 26th and 27th 2009 to, among other things, discuss project activities and the financial report for 2009, as well as the plan of action and budget for 2010.

Board members acknowledged the dedication and commitment of Ms. Sosseh, former WAJA Second Vice-President, who stepped down from the position following her recruitment as the Project's Print Expert in April 2009.

Ndey Tapha Sosseh took up appointment in May and has been acting in the position of Project Co-ordinator since September 1st, 2009. Her confirmation follows the death of the Project Co-ordinator, Alpha Abdallah Sall, from Senegal who was regarded as one of the doyens among West African journalists.

Under its three main components: Training, Defense of Press Freedom and Freedom of Expression and Publication and Dissemination of Information, the project seeks to use journalism as a tool to promote democracy, ensure participatory governance and transparency in ECOWAS member states; and provide West African journalists and media professionals with the technical skills to improve professionalism and to enable them to practise within the new changes in information and communication technologies.

It also seeks to promote high standards of ethical journalism in West Africa and respect of freedom of the Press and free expression by political leaders, economic lobbyists and other groups with influence; provide media managers the necessary competencies in business management; as well as support the emergence of a critical mass of high level professionals necessary to promote a culture of media excellence in the sub-region.

The WAJA-CBP is funded by the African Capacity Building Foundation in partnership with ECOWAS, UNESCO, USAID and Oxfam America.

The GPU President is replaced as Second Vice-President in the WAJA Executive by Bai Emil Touray, Secretary-General of the Gambia Press Union, in a position which will be contested at the WAJA congress slated for 2010. 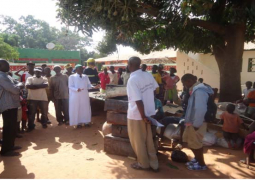