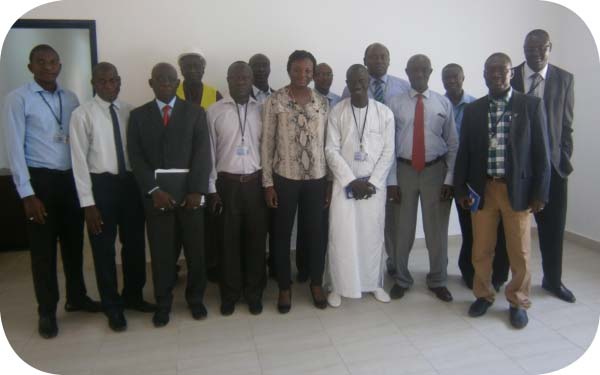 The management of the Gambia Ports Authority Tuesday paid a courtesy call on all the shipping agencies that the GPA partners with or is doing business with in Banjul.

The courtesy call was meant for the GPA officials to meet partner institutions with a view to sharing their concerns, constraints, among other issues, and to look at possible ways of addressing them.

He said the visit was to familarise themselves, following the change of GPA management, with the shipping agencies they are doing business with.

According to the GPA MD, he thought it wise and necessary with his team to go round and meet with all customers they have been partnering with in the various businesses.

The visit was to strengthen the already good working relationship that exists between the GPA and the various shipping agencies in Banjul, he added.

It was also meant for the GPA to renew their commitment to provide better and efficient services in their business dealings.

The visit was also meant to build the confidence and trust between GPA and its partners.

Mr Sanyang reiterated the importance of interaction in the customer-client relationship, adding that sometimes people talk through telephone calls, but it was necessary to meet face-to-face and get to know each other better.

MD Sanyang also stated that the management of GPA intends to organize a forum or seminar for ‘actors’ to try to introduce a ports community platform, which operates in other countries in the sub-region; hence the need to have it in The Gambia.

He said “The Gambia does not have a ports community platform,” and spoke of the need to have it.

MD Sanyang also used the opportunity to challenge all shipping agency representatives to be vigilant about cargoes or containers being discharged at the port.

“I will not compromise with any agency found wanting in carrying illegal materials,” he said, adding that the GPA management would work hard to maintain “the good reputation of the port.”

MD Sanyang also indicated that the safety of the port is their priority, as the authority is very much concerned about the kind of cargoes nowadays coming to The Gambia.

Ousman Jobarteh, deputy Managing Director GPA, said the visit was all about partnership as stakeholders.

He encouraged the shipping agencies to be showing more commitment to partnering with the GPA, as they have more to offer to the best of their customers’ satisfaction.

Also speaking was the New General Manager of MAERSK Line, Christian Goeman Borgesuis, who commended the GPA management for the initiative.

The visit was the first of its kind, and it was also a better opportunity for them to share with the GPA, he added, and assured all of a good working relationship with GPA management.

Tamsir Sallah, the financial controller, also commended their customers for paying their arrears on time to GPA, while he calling on others to fast track their payment as the “GPA needs money” to meet some of its development plans.