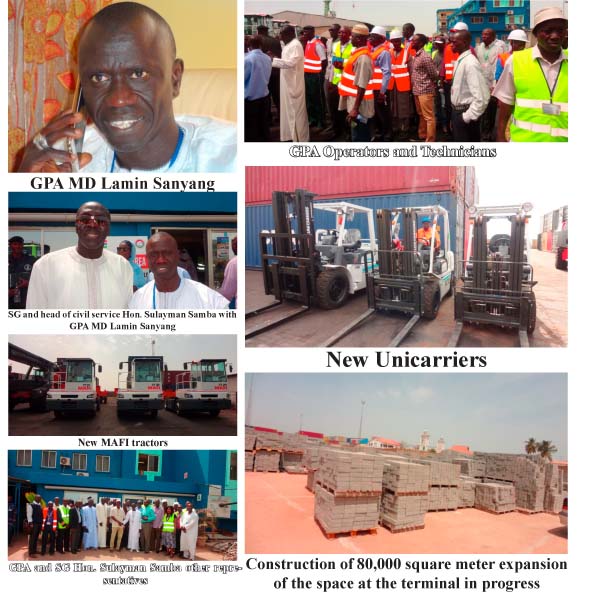 The commissioning ceremony, held at their main office in Banjul, was presided over by the Secretary General and Head of the Civil Service, and was attended by the management of the GPA and other shipping agents, and sister partners within the GPA.

The commissioning of the listed newly-procured cargo handling equipment is aimed at augmenting fleet availability to achieve greater productivity in ship handling and cargo deliveries at the port.

Speaking at the Commissioning ceremony, the Managing Director Gambia Ports Authority (GPA), Lamin Sanyang, said the day marked another important milestone in the history of the GPA, following the commissioning of the required cargo handling machineries to boost the number of the existing fleet.

He said GPA management are cognizant of the fact that to make the Port of Banjul competitive and efficient, it needs sophisticatedcargo handling tools in order to ensure better service delivery.

He said that over the years, the Port of Banjul had a limited number of cargo handling equipment, “which has caused a lot of challenges in terms of meeting the demand of our customers”.

He said the total amount of money spent by GPA to secure the new cargo handling equipment is one million, eight hundred and seventy-seven thousand six hundred and fifty-four euros.

This is the first time GPA has bought this number of cargo handling equipment to boost the level of fleet of cargo handling, he said, adding that it is all geared towards improving the efficiency of the port.

He also indicated GPA are seriously embarking on expansion of Banjul Port by 18,000 square meters in the terminal,in order to increase the area of the parking zone, “and when it is ready it will improve the efficiency of cargo handling” .

MD Sanyang on behalf of the board of directors, management and staff of GPA declared: “we are very proud to be associated with the President in terms of support from the Office of the President.”

“These equipment were procured from an international company called Kalmar, based in Sweden, which has a subsidiary company in Portland,” he said, adding that another 48-tonne of cargo is yet to arrive from Germany, adding that “we are expecting it very soon”.

“When that cargo is added to the current cargo, then we will have three new cargo container handling equipment,” the GPA MD said.

The management of the GPA will continue to provide effective and the efficient service required by the Gambian populace, Mr Sanyang went on, while reassuring all of effective service delivery at the GPA.

Regarding sustainability, he said the management “will not compromise” standards in the proper use of the equipment.

In presiding over the commissioning of the equipment, the Secretary General and Head of the Civil Service, Hon. Sulayman Samba, seized the opportunity on, behalf of the President of The Gambia, to congratulate the management of GPA through the Managing Director for the commissioning the new cargo-handling equipment, which has been an addition to GPA’s fleet of cargo equipment.

According to the SG, in any production business, of this nature, there are certain key inputs that determine the effectiveness and efficiency of the service to satisfy clients; thus it all involves capital, use of labour, management and technical knowhow.

He also said the expansion space of the Port is also critical to upkeep optimal performance and inputs to improve productivity and efficiency.

Hon. Samba, therefore, urged GPA to properly maintain the newly-procured machine for maximum use, to ensure that “it functions well and lasts for long”.

The aim is to improve upon small space, train personnel, improve managerial and technical aspects of the Port for effective service delivery, he continued.

Mr Samba further assured the GPA that the President would always give the Authority the maximum support, “in the sense that he knows how strategic the GPA is in terms of the economy of The Gambia.

“So the responsibility and expectation is very high on you, the GPA,” he said, and he commended the GPA for their “good track record”.

Also speaking at the ceremony was GPA Director of Technical Services, Francis Mendy, who said that over the years the GPA has been facing a lot of difficulties in trying to address the need of customers, “due to inadequate cargo-equipment”unavailable at the time .

“Over the period of years, GPA has witnessed steadily the acquisition of cargo-handling equipment to improve on the productivity and efficiency of the Port.

He further stated that GPA operators and technicians are strategic are in ensuring the upkeep and maintenance of the equipment to let them serve well.

He urged them to work as a team to ensure a better service delivery system, and maintain the machines’ longevity for them to serve their purpose.

Speakers on the occasion included GPA Board Chairman Mustapha Colley.