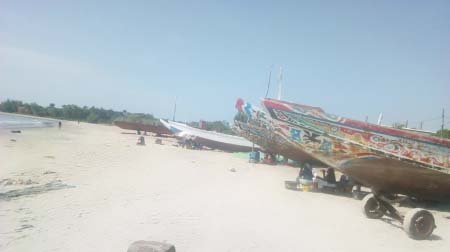 Lifting of a six-month ban imposed on night fishing in the country has angered fisher folks at Gunjur fish landing site in Kombo South and other fishing centers, who raised concern over the decision by the Ministry of Fisheries.

The ban was imposed on all fish landing sites across the country in June, at a meeting in Tanji, where agreement was reached by stakeholders in the fisheries sector to put a ban on night fishing for a six-month period from June 31 to December 31.

Recently, a letter of not granted from the Ministry of Fisheries and Water Resources dated 31 November 2019 addressed to one Lamin Sarr, who is alleged to have written a letter to the ministry requesting for the lift of the ban was obtained. In the letter, the ministry said it was only the minister who has the authority to declare a six-month closure on night fishing.

Another letter from the Department of Fisheries and Water Resources was later circulated to fishing center management committees in Brufut, Sanyang, Tanji, Gunjur, Jeshwang, Banjul, Kartong and Siffoe 1 November, giving directives for the closure of night fishing along the Atlantic from 4 November 2019.

The letter also stated that the decision to close and open the season for artisanal fishing lies with the ministry of fisheries and any unilateral decision by any individual, community or center to lift the closure is grossly unlawful.

Ebrima Sarr, a boat owner said the decision to lift the ban on night fishing even before its actual agreed date will hinder their work as fishermen, as it may lead to post-harvest before coming on shore.

He alleged that lifting of the ban has the potential to favor the fishmeal factories who, he said will purchase any type of fish, be it spoil or not while creating less into the local market as most of the fish catch during night fishing will be rotten and unsuitable for home consumption.

“How can fisheries ministry lift a ban on night fishing when it is not yet time to declare the end of the ban? The agreed ban period was six months, from June to December,” he said.

He said the lifting of the ban will affect them as local fishermen, saying the current period on night fishing remains hot and that will affect every fish that is catch. “This is not the best time to lift the ban considering the hot period we are in. The best period to lift it will be December when any fish catch will be in good state.”