In this present world many people profess faith in God the Almighty creator of heaven and earth and feel that God is for them alone.They live and witness to God as if no other people other than them or no other people knew or knows God more than them.Some have an attitude of monopoly to the extent that God is for them and they have to fight in God’s name against people they do not share their religion with.These people find it difficult to accept that no one particular race, religion and colour can monopolize God.

God the almighty, the one whose power supersedes all powers in the one creator of the whole universe and the universe belongs to Him. He is good and kind to all that He created and it is not possible for His name to be invoked in vain by any created person. In Christianity He is acknowledged as God the Gather of our Lord Jesus Christ who is the God of all creation, the Supreme Being who lives in eternity and exerts his influence over the whole of creation.

When God started to choose in Biblical history, a special race of mankind for himself and consecrate them as His own, He did not do that to abandon the rest of mankind. He did that simply in order to make those people as His contact point to reach out to the whole creation. God’s choice of Abraham was one of the best ways God has shown His love for mankind. For God, the people of Israel were a special sample through which He wanted to extend His favour to the whole world. All that God did for the people of Israel meant that God is capable and willing to do that for every human being. Yes the people of Israel were favoured as God’s friends but this was an avenue to establish God’s friendship with the people of this world.

In Deut. 4:6-8, Moses said, “Keep the laws, put them into practice and other peoples, will admire your wisdom and prudence”. God’s laws were meant for both the Jews and non Jews who will see the goodness of God in the laws.

In the New Testament, Jr. 14:2, Jesus said, “Whoever holds to my commandments and keeps them is the one who loves me; and whoever loves me will be loved by my father, and I shall love him and reveal myself to him”.  Jesus Christ did not make a choice of the Jews in saying these words. What he said refers to people who will accept his words and not necessarily had to be those of his time only.

In Christianity it is in Christ Jesus that God the Father unites all races to himself and made them to profess one faith and to speak one language of love.  For us Christians our emphasis in our faith is not based on cultural differences or tribe, variety in pattern of worship and racial basis. The profession of faith in Jesus Christ and the keeping of His commandment of love should always be seen as the basic thing which merits people’s salvation.

There is an African proverb that says “God does not send His rain on one man’s roof”. If we perceive the wisdom of this proverb, God therefore is for all of us human beings and we need to profess faith in Him and worship Him alone.  This can come through very sincere hearts that knows His words and live by it.  In this present world there are many religions, many scriptures and ways in which God the Almighty is worshipped.  We only need to look and accept our divergence’s of faiths.  God alone is to be worshipped and no humankind can monopolize God.

The state of affairs in the world today demands for a looking back to what God made this world to be.  God created this world for Human beings to live in it, know Him, love Him and serve Him.  All people are part and parcel of God’s creation and need to see each other as God’s people.  There is one God’s creation just as there is one God. There is no need for the meaningless wars, killings, and kidnapping of innocent people in the name of God or religion. 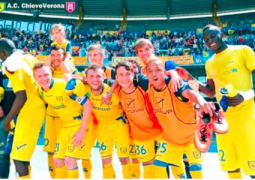 Ali Sowe loaned to Italy’s Serie B side