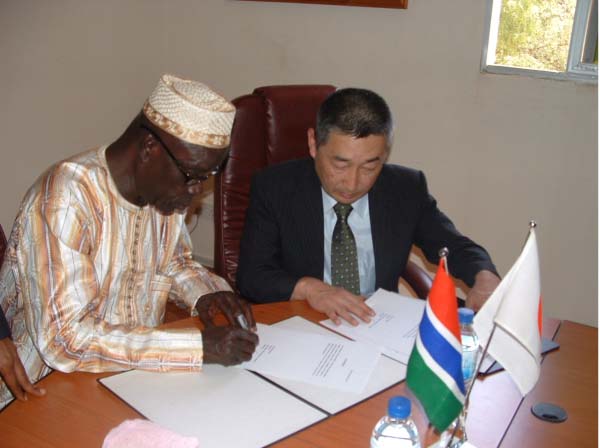 The Gambia National Olympic Committee and the Japanese Embassy through its consular yesterday signed a grand deal of D4,800,000 worth of sports equipment to be distributed to the handball, volleyball, athletics and basketball associations, “a project for the improvement of sports facilities for youth development in Banjul”.

The signing ceremony held at the GNOC House on Bertil Harding Highway in Bakau, converged the GNOC executive body, Japan Consular, and heads of various associations, who are all geared towards seeing the effective and proper use of the equipment by the various beneficiaries for the development of Gambian sports.

The package, which consists of 115 various equipment, included track and field items, among others to name the associations.

Giving his remarks before the official signing, GNOC president Alhagie Momodou Dibba, who first recalled his presidential election in 2011, said the two days after the election, there was a signing grant with the Japanese from the NOC to the GNOC, meant to assist the youth in the Kanifing Municipal Area, whose contract was honored and fulfilled.

“Japan is a friend of Africa and The Gambia, particularly in assisting the Olympic committee and the national sports associations,” Dibba said, adding that they are doing this not to restrict themselves to basketball, volleyball and athletics. He cited athletics as top sport in the Olympic movement.

It is significant to choose some of the Olympic sports that would represent The Gambia in the Olympic Games, he said, with all the necessary supports given to the associations.

He however, said the 2011 Japanese grant was sent to the martial arts, with its accreditations of zudo, karate, athletics to have been forwarded for their representations’ next month.

He further thanked Mr Kondo and the Japanese NOC for their support.

The Japanese Consular Shigeru Kondo expressed Japan’s strong and ceaseless commitment to promote sport as a valuable tool for development and peace for children and youth in The Gambia within the framework of the grant assistance for cultural grassroots projects of Japan.

Mr Kondo said recently Japan launched a new worldwide initiative called “sport for tomorrow,” which is out to further promote the Olympic movement worldwide by working closely with the IOC and sports leaders across the world towards

Tokyo 2020 Olympic and Paralympics games, he said, would impact more than a million athletes of tomorrow in more than 100 countries by 2020.

He expressed hope to see a strong and long-standing friendship between The Gambia and Japanese people, as the GNOC supports the promotion of Gambian sports.