According to press release from the West Africa Network for Peacebuilding, the World will observe a global week of action from to . This week is dedicated to a vigorous campaign to increase awareness on the newly negotiated legally binding treaty Banning the use of cluster bombs/munitions.

Cluster munitions are large weapons which are deployed from the air and from the ground and release up to hundreds of smaller subminitions.

Air-dropped or ground-launched, they cause two major humanitarian problems and risks to civilians, first, their widespread dispersal means they cannot distinguish between military targets and civilians so the humanitarian impact can be extreme, especially when the weapon is used in or near populated areas. Many subminitions fail to detonate on impact and become De Facto Antipersonnel mines killing and maiming people long after the conflict has ended.

In February 2007, 46 Governments met in to endorse a call to conclude a new legally binding treaty that prohibits the use, production, transfer and stockpiling of cluster munitions.

On 107 States negotiated and Adopted at the Dublin Diplomatic Conference a legally binding international treaty that prohibits the use, production, stockpiling and transfer of cluster monitions and provides assistance to affected communities. In September 2008, The Gambia participated in a follow up process conference held in . The convention will be open for state signatures in on .

The Gambia Secretariat of the West Africa Network of Peacebuilding therefore hereby informs the general public that it will be organising a number of radio programmes during the course of the week. The aim is to highten public awareness on the dangerous use of cluster munitions and to urge government to sign the convention in on the 3rd of December. 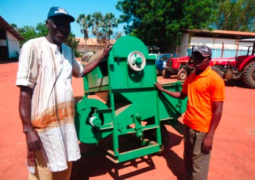