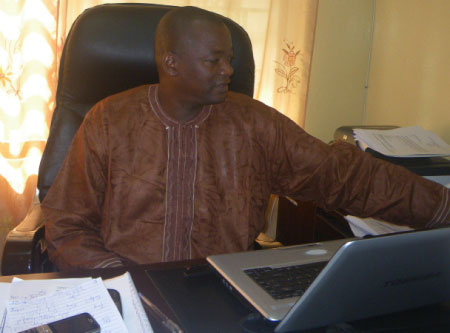 Gambia Livestock Marketing Agency director general Dr. Demba Jallow has expressed dismay over the condition of the Central Abattoir in the country, especially that of the Brikama Central Abattoir, saying “it is in a very deplorable condition”.

Speaking in an interview with this reporter recently at his office in Abuko, DG Jallow said the situation of the abattoir was discovered after his staff visited the central abattoirs in the regions to assess their conditions.

Based on this finding, he explained, the Gambia Livestock Marketing Agency (GLMA) deemed it necessary to embark on a massive rehabilitation of the dilapidated central abattoir in the regions.

The rehabilitation “is in progress”, after the agency had secured some funds, he said, adding that the agency had rehabilitated the floor, roofing, and the waste disposal pits and among others so that meat can be hung at all times.

Dr Jallow also asserted that the agency had put in water supply at the Brikama Central Abattoir.

“We will also provide office space for the staff, store for the office equipment and a security house for the protection and safeguard of the Abattoir,” he added.

He stated they have completed most of the installation and are now left with the fencing, which should be rehabilitated with the provision of two toilets inside to ensure hygiene, as well as a waste disposal pit outside whereby other products can be packed in it for future use for horticultural development.

The exercise, he added, stared two months ago and “work will be completed by the end of May”.

When the project is completed, the Agency will hand over the rehabilitated Abattoir to the Management committee of the central Abattoir in Brikama, he says.

Dr Jallow further stressed that the responsibility of the agency is to ensure that hygiene meat is produced at all level starting from the selling to the last process.

He further stressed the importance of rehabilitating the central Abattoir, saying for that of Brikama Central Abattoir it had already improved the hygiene in the sense that slaughtering was being done on the ground attracting flies to every part of the place.

“There was no water for proper sanitation during the process of slaughtering and processing but now with the coming of the GLMA initiatives to rehabilitate the central abattoir, there is a decent process to ensure hygiene meat is produced,” he said.

“With this initiative all butchers and livestock owners now have to register with the Gambia Livestock Marketing Agency (GLMA), and those registration fees will be paid to the government, and slaughter fees that the agency is getting from the Abattoir used to rehabilitate the central abattoirs, “which are in a deplorable condition,” he said.

He added that their role is also to help the agency in the minimizing cattle theft.

Dr Jallow further revealed that their main plan is to continue to rehabilitate slaughter slaps at the abattoir, adding that the next rehabilitation will be in Basse, Bansang, and Farafenni, based on the availability of fund.

Plans are under way to introduce the weight scale, he says, adding that all materials are in place to start the process.