The annual Late Pa Modou Sarr Basketball Tournament is set to get underway on Thursday 30 January 2014 at the Serrekunda West Mini Stadium Basketball Court with Lamin taking on Manjai in the opening game of the competition.

Pa Modou Sarr, a Gambian basketball player, died in a car crash in the USA in 2004.

He was playing for the Navarro College basketball team at the time of his death.

After a successful 3-on-3 basketball tournament, the Gambia Basketball Association (GBA) would like to use this momentum to continue engaging Gambian youth via basketball and to also use this tournament as a prelude to the start of the National Basketball league, the association states.

The tournament will be a single elimination knockout affair with matches scheduled to take place on the following dates: 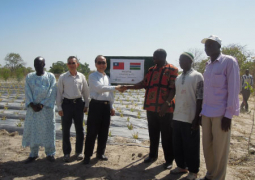