Hello and a warm welcome to yet another interview, this time focusing on victims’ rights before the International Criminal Court (ICC).

Malick Jallow has spent the past six months working on victims issues with the International Criminal Court at ().

Q. Thank you very much for granting us this interview. Can you briefly tell us about yourself?

A. Well I don’t want to go much into personal details because the dominant purpose of this interview is to inform and disseminate what is happening at the International Criminal Court (ICC) particularly in the area of Victims Participation and Reparations, which is a very new development that I think should be adequately disseminated so that as many people as possible can know about it. But I can give a brief outline. I am Malick Jallow and before going to the ICC, I worked as a Public Prosecutor with the Attorney General’s Chambers. My role then was to give Legal advise on criminal cases and prosecute them were appropriate.

I have been with the ICC, at , for the past six months, working on victims' issues; first with the Legal Advisory team at the Immediate Office of the Registrar and later with the Office of the Public Counsel for victims. My role has been to give legal advise and also to carry out legal research and analysis on relevant issues relating to international and comparative law.

Q. The Office of the Public Counsel for Victims (OPCV) of the International Criminal Court reinforces the capacity of legal representatives to provide legal representation for victims of crimes against humanity. Can you elaborate more on that?

They will be given the opportunity to present their views and concerns to the Judges which means, amongst other things, that they no longer just have to restrict their involvement to being used as witnesses by the prosecution because that in itself has its limitations. This is so because once being used as a witness, rightly or wrongly, whatever a victim says has to be consistent with the case presentation strategy of the prosecution. But with this victim's participation scheme now, they have been given greater leeway to present their views and concerns. They don’t just have to say what the prosecution wants them to say, but whatever they want to say provided that it is justified in the eyes of the judges. Indeed, as of June 2010 over 700 victims have been authorized by the ICC Judges to participate in proceedings before the ICC.

This brings me to the criterion that has been laid down for one to participate as a victim. First of all, one has to prove that he/she suffered personal harm as a result of one of the charges before the court. For example, an accused person has been charged for, say the offence of rape and one of the victims of such atrocity comes forward and wants to participate, the particular victim has to prove that he/she has suffered personal harm as a result of the rape charge against the accused person in question. Once this threshold is met it is then up to the Judges to decide on the modalities of the victims participation in a manner that is not prejudicial to the rights of the accused and a free and impartial trial. For the first time, Victims of serious international crimes won't just have to rely on other people to speak for them, but can have their own voice, speak for themselves, give firsthand account of what happened and hopefully obtain meaningful redress for the crimes committed against them. So essentially, this is the victims’ participation scheme that the ICC has introduced.

Q. Can someone or people who perceive themselves as victims sue another person or persons in authority to the Court at the ICC?

A. Actually you cannot sue per say but you have what is called reparations. If you participate as a victim and at the end of the trial, a conviction is obtained against the accused person responsible for the atrocities committed against you, then you can apply for reparations, which opens up the possibility of the court ordering the accused person to compensate his victims. As a last resort, if the accused person is deemed indigent i.e. unable to pay or provide any form of reparation for his victims, reparation can come from the Trust Fund for Victims of the Court, which is normally made up of voluntary contributions from the state parties to the Rome Statue i.e., the ICC.The Trust fund can also be used by the Registrar of the Court to provide support and other forms of assistance to victims who for whatever reason cannot participate in proceedings and thus unable to seek reparations from the Court. Therefore, not participating before the ICC doesn’t actually preclude a victim from benefiting from the Trust Fund for Victims.

Q. Can a set of people of a country who consider themselves as victims of crimes against humanity sue their President (for example) at the ICC?

A. If the individual is an accused person before the Court, then yes, victims can participate in his trial and seek reparations were appropriate.

Q. Who is/are considered a victim or victims by the ICC?

A. Well a victim is someone who suffers personal harm as a result of one of the charges that has been brought against an accused person before the ICC. Harm can be psychological or physical or both. Also, very close relatives of victims who suffer harm, harm in the broader sense e.g. you have a very young child who has been recruited as a child soldier thus inflicting a lot of trauma and suffering on the parents of that child. Such parents can apply, to participate as victims as well even though no direct harm was inflicted on them.

Institutions can also participate as victims e.g. buildings or structures illegally destroyed in the context of crimes against humanity can qualify as victims and can appoint someone with loco standi, say the Head of the institution, to participate on its behalf and seek redress accordingly.

Q. How does the ICC get victims to the Court?

A. Most Victims are really vulnerable. To safeguard their safety and personal well-being, the court tries to minimize its interaction with them as far as possible. Indeed, victims seldom travel to the court; they are always encouraged to channel their participation through legal representatives appointed by themselves. So it is the legal representatives who actually go and meet them and seek the information that they need to seek. The victims are however kept abreast of developments regarding their rights before the ICC. They are adequately informed.

Q. So does this mean victims can stay away from the Court?

A. I think it is a good idea because it minimizes the security risks that can be occasioned by their direct participation. There are also additional measures that are put in place to protect them e.g., in most cases, information leading to their identity is often redacted from the public documents of the Court.

The objective is to help ensure that victims don’t suffer harm as a result of their interactions with the court.

Q. Any other thing?

A. I would like to thank you for your time and to wish you all the best in your promising career as a journalist. 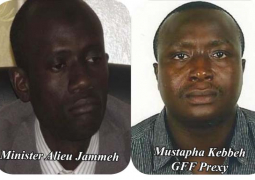