Amid speculations and theories from home and abroad, concerning the performance of The Gambia Under 17 team in the ongoing FIFA World Cup, the Gambia Football Association (GFA) has issued a statement owning up to the dismal performance of the boys but at the same time, dispelling what it calls frivolous discussions surrounding the team.
Read the full text of the release signed by General Secretary and crisis management expert Jammeh Bojang


PRESS RELEASE
In view of the recent performance of our national team in the FIFA U-17 World Cup, Nigeria 2009, a lot of provisional discourse has emerged as to what circumstances prevailed. Thus, the Executive Committee of the Gambia Football Association has decided to own up and dispel certain frivolous talks surrounding our darling national team.

Firstly, it should be recalled that in the past four (4) years, The Gambia qualified and played in three (3) FIFA World Cups and was crowned champions of Africa twice; the most recent was in April 2009 in Algeria. These achievements were hugely celebrated by all and sundry. It took many years of delicate planning and hardwork.
Ultimately, a lot of phony factors have been forwarded by some sceptics that are claimed to have hampered the performance of our national team in the ongoing FIFA U -17 World Cup, Nigeria 2009. We honestly disqualify these reasons thematically hereunder

Not the first time was this test conducted on players in this category but the emphasis that FIFA laid out to all Participating Member Associations compelled the GFA to screen all fifty-one players in a recommended reputable Clinic under the supervision of a recognised specialist. These tests indicated that eleven (11) players from our Championship - winning team were not qualified for Nigeria 2009. As a bona fide member of FIFA, the GFA Executive Committee had to adhere to FIFA?s warning not to register these over-aged players.  What could have been more catastrophic than presenting these over-aged players and be expelled from the FIFA World Cup

Upon our team?s return from African U-17 Championship, Algeria 2009 and upon receipt of the results of the MRI tests conducted, the Executive Committee recommended the setting up of a surrogate U-17 team in preparation for any eventuality that may surface as a result of these tests. Our technicians selected younger players who started training immediately. The one all-draw game between these two teams confirmed our belief that our scheme was workable. After losing eleven (11) players from our Championship-winning team to the MRI Test, our coaches and technicians collectively selected the best out of our surrogate team and blended them with the few that survived the age test for the International Training Camp in the United Kingdom. Thus, for anybody to think that the Assistant Coach Lamin Sambou was bribed in selecting players was far from the truth. The final selection was done collectively by all the four (4) coaches / technicians

In the recent past, we have heard some cynics blame the management of the GFA for not arranging international training camps for our national teams in preparations for competitions. These sceptics believed that we could not improve our game because we were not exposing our players to international standards and facilities. What a paradox to hear them say now that it is a waste of resources

In 2007, The Gambia U -17 national team had a three - week camping in the United Kingdom in the midst of winter during our preparations for the FIFA World Cup in Peru. We proceeded to Florida, Costa Rica and finally into Peru with entirely different weather conditions. Was it that we had excellent results against Brazil and Qatar that was why the criticisms were withdrawn? The recent camping in the UK was at a time when summer was just phasing away and the climate was mild

Looking at the cost component, it was cheaper to travel to United Kingdom than fly to an African country where standards and facilities are not comparable. Again, we must remember that we have a lot of Gambians in the Diaspora specifically in England who were also chanced to see and enjoy our gallant team. The kit sponsorship package was acquired as a result of this camp being help in the UK. This camp also gave us the candid opportunity to expose our players to some of the best Academies in the world.
4.Sponsorship funds
It is really disheartening to learn that some unscrupulous people are spreading some misguided statements in public and on some print and electronic media that The GFA has mismanaged the sponsorship funds allocated for our participation in the FIFA U-17 World Cup, Nigeria 2009. Such statements are even expounded upon by so-called football pundits with the sole intention of tarnishing the image of the Executive Committee of the Gambia Football Association. These statements are not only imaginary but are really an affront to the prestige and dignity of very decent persons who have great vision for our game and National Association

5. Appreciation
The Executive Committee and Management of the Gambia Football Association extend sincere appreciation and thanks to H.E Sheikh Professor, Dr. Alhagie Yahya A.J.J. Jammeh, President of the Republic of The Gambia and Chief Patron of The GFA for his unflinching support and invaluable contributions to our football development initiatives

Our appreciation also goes to our dear sponsors GAMTEL and GAMCEL whose enormous contributions are a source of great consolation to the Gambia Football Association. We value your partnership with the realisation that these are true and meaningful Gambian entities; YAAY BOROM.
To the Gambian football family, we offer our sincere apologies for the poor performance of our national team in the FIFA U ? 17 World Cup, Nigeria 2009. We can attribute our dismal showing to the MRI test that disqualified our more experienced badge of players. But surely this team will also come of age and garner experience for greater victories in the near future

For every day that goes by

We achieve, we smile, we regret

And sometimes we even cry

But the most important thing is, we learn. 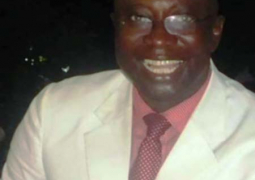