(Friday, 31 October 2014 Issue)
Future of Salikene Project, a German NGO, and the Association of Medical Emergency Aid The Gambia has been engaged in community sensitization on Ebola prevention.

The community sensitization in Salikene and the staff of Salikene Health Centre was recently held in the North Bank Region village.

It was organized by Future of Salikene Project, a German NGO in partnership with the association, a charitable organization.

The sensitization exercise was follow by presentations of Ebola materials and equipment to the AFPRC General Hospital in Farafenni, and to Jahally and Brikamaba Health Centre in the Central River Region.

Speaking on the occasion, Dr. Lamin Janneh of the hospital in Farafenni underscored the government’s commitment to the prevention of Ebola.

He commended the organizers and donors in complementing the government’s efforts by building public awareness on Ebola prevention measures.

Dr Janneh said people should promotehand-washing and the dissemination of information, adding that training of health care providers on case management, treatment, infection control and referral protocols are fundamental to avoid the spread of Ebola.

Alasana Ceesay, the coordinator Future of Salikene Project, said the fight against Ebola calls for the concerted efforts of all, and that the presentation of materials and equipment to health facilities would enhance the response.

Alieu Sowe, a public health officer who doubles as the Ebola focal person for the association, said everybody is at risk and called on the community to intensify the campaign for an Ebola-free country.

Lamin Kanyi, the regional health promotion and education officer, applauded the community of Salikene and donors for their foresight in strengthen public awareness on the Ebola virus.

He said the intervention would contribute to a Gambia free from the Ebola virus disease.

Tida S. Kinteh, officer In charge at Salikene Health Centre, commended the people for their support to health care services, adding that the training on case management would strengthen service delivery and safety.

Momodou Bintou Dibba and Sainey Kanteh the alkalo of Salikene, both spoke of their resolve to intensify the campaign against the deadly virus.

The community leaders thanked the donors for their support to the people of Salikene over the years, noting that it has improved their health and economic well-being. 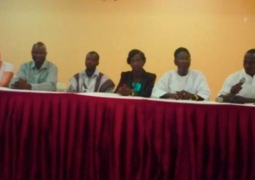