Information Technology equipment worth about eight thousand Euro (8,000 Euro) were yesterday donated to the Gambia Immigration Department at a ceremony held at its headquarters in Banjul.

Speaking at the ceremony, interior minister Ousman Sonko hailed their German counterpart for the laudable gesture, saying the Gambia government had not regretted collaborating with the Government of Germany.

According to him, the true generosity of the German government was demonstrated few months ago when the German boarder police donated two jeeps to their Gambian counterparts. “And today we have also witnessed the presentation of these sophisticated IT equipment,” he noted.

According to Hon. Sonko, information is power and proper database is required for future planning and to make things easier and faster. Such equipment would play a pivotal role in enhancing the effective smooth operations of the immigration, he says, adding that the world is going digital and as a digital age this would help to control and monitor the influx of people who can be traced through air, water and land in a coordinated system.

“The importance of database cannot be overemphasised as it serves as the central nerve for information coordination and sharing within all units connected to the system and thus, help to plan ahead,” he added.

He thanked the MOWCI for partnering with the Immigration Department, even though they “are entrusted with the responsibility of information and communications management in the country”.

He said: “No country can fight illegal migration, terrorism and other illicit traffic alone; no matter how that country is endowed with resources both human and material resources, it is not going to be possible. Therefore collective and collaborative efforts together we will be able to achieve something.”

For his part, Rudiger Lebkucher, a representative of German boarder police, commended the Gambia government for the cordial relations between the two countries, adding that Germany and The Gambia have a lot in common and “our people are the same, despite our religious or cultural boundaries”.

They would do anything they could to support the Government of the Gambia and her people, he added.

Demba Ibrahim Sankareh, a representative from the MOWCI, said his ministry had secured some funds to establish IT network infrastructure at border areas and within the internal units to secure and share information in a coordinated system. Mr Sankareh stressed the need for continu capacity building training to be able to meet new faces of technology. He commended the donors for their gesture.

Buba A. Sagnia, the director general of the Gambia Immigration Department, stated that German border police have been very cooperative for the past years in terms of IT capacity building and other areas they have intervened in supporting the immigration department.

In a similar development, in the said department five officers were also decorated to the rank of assistant immigration control officer, followed by the handing-over of 17 certificates to 17 officers who have completed an intensive version of French course. 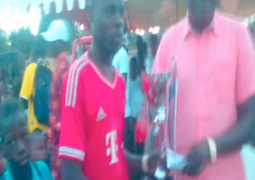