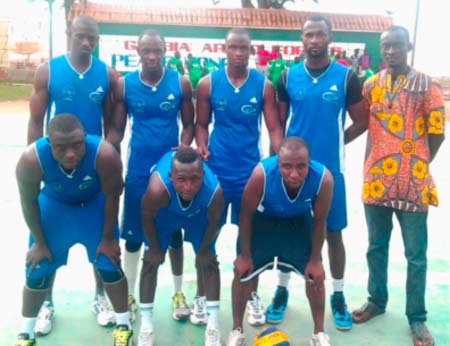 With Sanu Secka’s attacking prowess, the visitors lost ground in the golden set after collecting only 3 points.

Gamtel/Gamcel under the tutelage of Lamin Suwareh had further open up the race for the national title. They lost the rhythm in the 1st set after narrowly losing 22-25.

East failed to maintain the game plan in the second set and it was settled 25-9. Gamtel/Gamcel hopes were earlier dashed in the 3rd set when Kebba Ceesay, Sainey Jawo and the rest regained power to finished the set 25-18.

The visitor’s opportunity to collect maximum point in the game was down in the 4th set when attacker Sanu Secka composed his men to win the game. With all of Sainey Jawo’s advantage in blocking Sanu’s influences in spikes were beyond control and the host established the 4th set 25-12.

The game was tied at 2-all and ultimately the golden set rule was implemented and Gamtel/Gamcel was the first to reached 15 points when East was at 3. Lamin Suwareh’s men won the game 15-3 to claim the 3 points.

At the late kick off, Interior faces their closest challengers Gamtel/Gamcel female in a decisive game, but it was postponed due to darkness after the police women took the lead 26-24. The game was rescheduled for Thursday in Banjul.

Meanwhile, on Sunday the reigning champions Old Jeshwang condemned their closest rivals Gambia Armed Forces 3-1 at Jeshwang to comfortably maintain their grip in the top spot.