Dr. Isatou Touray and Amie Bojang-Sisaho, program co-ordinator of Gamcotrap are being tried for alleged theft.

The two prominent women’s rights activists were alleged to have, in 2009 in and diverse places in The Gambia, jointly stole €30,000, being money provided by the YALOCAMBA SOLIDARIDAD of to GAMCOTRAP.

Continuing her testimony, Dr Touray told the court that GAMCOTRAP happened to meet two sisters, Patricia and Kris, in 2007 and through that they decided to prepare a proposal to Yollocumba Solidaridad in .

She said the proposal was submitted to Patricia and Kris, who promised them that they were going to look for funds for GAMCOTRAP in from any association which has interest in what Gamcotrap was doing, in terms of fighting against female genital mutilation or FGM.

Asked by her counsel who prepared the proposal for GAMCOTRAP, Dr. Touray said it was made through participatory efforts.

Dr Touray pointed out that they used a Gamcotrap computer to prepare the proposal, and that the computer was working, and in good condition at the time of preparing the proposal.

At that juncture, defence counsel Amie A.A. Bensounda applied to tender the project proposal in evidence, which was admitted and marked as an exhibit.

The Gamcotrap director further told the court that her organization was not dealing with micro finance, because they did not have a license to operate as micro finance company.

She said that the purpose of the project was to train and sensitise people to be aware, and for the eradication of FGM in The Gambia, adding that they spent the monies to fight against FGM.

“We signed a contract agreement with Yollocambia Solidaridad in 2009. I have never met PW8 prior to her testimony in this court. Nobody had ever come to The Gambia to meet GAMCOTRAP prior to signing of an agreement,” Dr. Touray told the court in her defence.

She said the agreement was being prepared by the Yollocamba Solidaridad in and they gave it to one Sucis to bring to GAMCOTRAP to look at the contract agreement, before appending her signature as executive director of (GAMCOTRAP).

She revealed that apart from this contract agreement, she had not signed any documents with Yollocamba Solidaridad.

The case at that juncture was adjourned till 3rd August 2011, for hearing to continue. 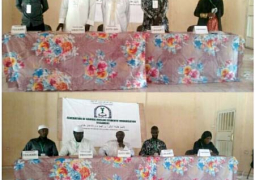