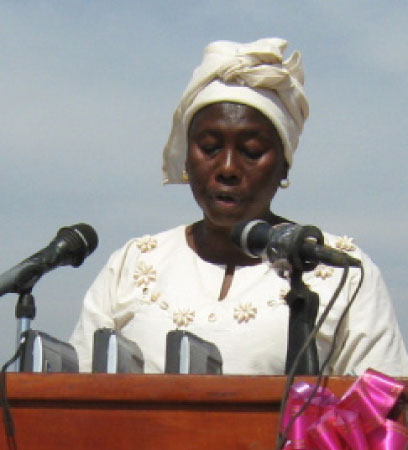 The Gambia Committee on Traditional Practices affecting the Health of Women and Children (GAMCOTRAP) with support from European Union through the Non-State Actors Strengthening Programme on 6 February 2012 celebrated International Zero Tolerance Day on Female Genital Mutilation in The Gambia.

The event, which began with a march-past, cultural performance and delivering of solidarity statements, was attended by civil society organizations, women circumcisers, traditional communicators, women activists, and others from across the country.

The procession was led by the Gambia Police Band from West Field junction to Kanifing Municipal Council Multi Purpose hall on Jimpex Roadin Kanifing where solidarity statements were delivered in observance of the event.

in Kanifing where solidarity statements were delivered in observance of the event.

Speaking at the ceremony, Dr Isatou Touray, executive director of Gamcotrap, said the day marked a “very important event” in the history of the Inter-Africa Committee on Traditional Practices (IAC) and its national committees celebrating February 6 zero tolerance day to FGM.

The international theme for this year is “From Malabo to New York”: Support the Resolution of the UN General Assembly Banning FGM in the world.

In The Gambia, Gamcotrap has also localized it theme called: “From Kartong to Koina: Calling for a Law against FGM.”

The objective is to call international, regional, national and community attention to the efforts needed to free women and girls from the adverse tradition of FGM and to celebrate action towards its elimination.

According to her, the United Nations sets aside 6 February as a day to globally recognise the need to protect girls and women from all forms of Female Genital Mutilation (FGM) dubbed “International Zero Tolerance to FGM Day”.

“Since the year 2003, members of a regional body leading the campaign in Africa, known as the Inter-Africa Committee on Traditional Practices (IAC), have been celebrating this political commitment to protect girl children and women.

Gamcotrap has also taken the lead in the campaign against FGM as well as the observance of the day.  Since the first Dropping of the Knife in 2007, communities and individuals have been calling for a law to protect girls from FGM.

The call has been getting louder from communities who have been exposed to the dangers of FGM and the need for adults to take responsibility towards the protection of children against the practice.  This further led to two other Dropping of the Knife celebrations by communities in 2009 and 2011 respectively.  To date, in The Gambia, more than one hundred circumcisers have dropped their knives in more than 564 Communities in the Upper River, Central River South and Lower River regions.

Recognizing the importance of supporting the rights of women and children Gamcotrap with funding from The European Union and under the Non-State Actors Strengthening Programme in The Gambia has make it possible for Gamcotrap to spearhead the celebration of zero tolerance to Female Genital Mutilations day in the Gambia.

Meanwhile, it would be recalled that African Heads of State also took a decision to support a worldwide ban on FGM during its Seventeen Ordinary Session held in Malabo, Equatorial Guinea, from   30 June to 1July 2011.

US ambassador Pamela Ann White delivered a solidarity statement to mark the event and the ceremony was moderated by the executive director of TANGO.