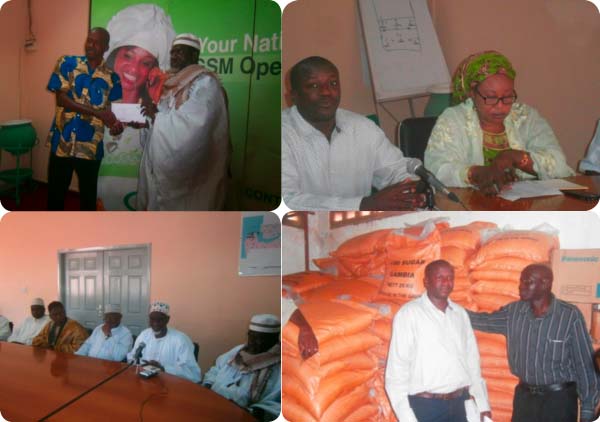 Gamcel, one of the leading national GSM operators in The Gambia, recently handed over one hundred bags of rice of 25kg to the Gambia Islamic Supreme Council (GISC) for onward transmission to the needy beneficiaries in all regions of the country.

Held at Gamcel’s conference room, the handing-over of this Ramadan gift to the GISC was attended by senior management and staff of Gamcel, prominent Islamic scholars and members of the media.

Since its inception, Gamcel has maintained its tradition of providing worthwhile quality services not only to the Gambians, but also to people in the sub-region, he said.

“Gamcel is not only for the Gambian people, but also for the sub-region,” he added, saying the company is one of the most important service providers in the sub-region.

“Therefore, it is not just an honour for the Supreme Islamic Council to support Gamcel and stand by Gamcel, it is also our duty to ensure that Gamcel goes further,” he said.

Supporting Gamcel, he went on, has a lot of positive impacts as it is geared towards the promotion of the national service provider.

Mr Drammeh expressed appreciation and gratitude through the President of the Gambia Supreme Islamic Council for the initiative.

Gamcel is a national company hence there is need for collective efforts and support to make Gamcel a better company for the good and in the interest of the nation, he said.

“Whatever people invest in Gamcel company would be ploughed back to the Gambian people, which makes it more important to support them,” he added.

He urged Gambians to patronize Gamcel for the national interest, as the company has been supporting not only the Gambian people but also foreigners using their SIM card.

Alhaji Badjan reminded the gathering that in the holy month of Ramadan, whatever “you give to your fellow Muslim you will receive a reward from the Almighty Allah.”

He acknowledged the efforts of Gamcel in providing one hundred bags of sugar of 25kg, and assured them that the Supreme Islamic Council has representatives all over the regions and would ensure the items reach all of them.

Lamin Fofana, Gamcel’s manager for marketing and communications, said the event marked another important milestone in Gamcel’s efforts at contributing to the socio-economic development of The Gambia.

He said Gamcel is highly recognised and known for such gestures, in that every year during the month of Ramadan, Gamcel would organise such gathering to give support to the Gambia Supreme Islamic Council.

“We at Gamcel always say it is worthy to call Gambia Supreme Islamic Council and deliver the package of sugar to them for onward transmission to the needy people in the whole country,” Mr Fofana said.

This is why they at Gamcel are always proud and happy in doing such important things for the people of the country, he said.

“We believe that we are normally called ‘Yaay Broom’, which means we are owned by the Gambian people; so anything that we can do for the Gambian people we are always happy or more than happy to do that for them,” he further stated.

“We hope that this trend will continue year after year, and we always need your prayers so that this will be a continuous process and we can prosper more and more, as we know we are in competition,” he said.

Although they are doing very well, he added, they still need prayers and support from the council and the people of the country.

Sarjo Khan, Director of Customer Services at Gamcel, said the occasion was yet another opportunity for them to make another annual Ramadan sugar presentation to the Gambian people.

“Gamcel has done it again and would want to continue the same year on year on as it has become a tradition in every Ramadan for the company to call on the Supreme Islamic Council on behalf of the country,” he added.

He said the reason was that the Supreme Islamic Council are the representative of Muslims in the country, which is why the presentation of sugar to the needy people is always done through the GSIC.

“This is a Muslim dominant country and we feel that during this holy month of Ramadan, giving back to the public what has been given to us by the same public is, indeed, a laudable activity.”

“We indulge you to help us to continue praying for the company so that we will have the ability, the strength and the capability to continue doing it not only during the month of Ramadan but also, and with more activities, in other months,” he said.

Ma Nyima Cham, Senior Marketing Manager at Gamcel, in her remarks, said it was another event of giving out Ramadan sugar to the Gambia Supreme Islamic Council for onward transmission to the needy across the country.

She expressed appreciation with the Supreme Islamic Council for accepting the offer for onward distribution of the gifts, and asked them to pray for Gamcel for more blessings and prosperity so the company shall be in a position to share with the needy in the country.

According to her, Gamcel has more to offer its customers, but needs more support and prayers from the Gambia Supreme Islamic Council and the general public.

“We appeal for all and sundry to use Gamcel line, which has wider coverage,” she added.

Aja Ndey Sainabou, Gamcel promoter, also expressed similar sentiments and appreciation for the Gambia Supreme Islamic Council for receiving the sugar package for onward transmission to the needy across the country.

The sugar is not meant for exchange, she said but noted that Gamcel would be very happy if people join their GSM line en mass, as it is the national GSM operator owned by The Gambia.

She also appealed to Gambians to join in the promotion of Gamcel and at least to have a Gamcel line, adding that there is need to make Gamcel a better company for the development and the future generations of the country.

She also revealed that Gamcel is not only giving out sugar to the needy; it is also giving out hajj tickets to Mecca to people to go and perform the pilgrimage in 2015.

Gamcel, she added, is also not only giving out to the Muslims but also to Christians, to visit Rome or the holy land, as they are part of the Gamcel promotion.

Gamcel’s deputy managing director, Ramou Nyassi, expressed joy and appreciation of the words of wisdom stated by the Gambia Supreme Islamic Council as regards the good work and service Gamcel is rendering to its customers.

She urged all and sundry to continue recognizing Gamcel’s effort in helping the needy and their customers.

“Today the words that have been said by the Supreme Islamic Council about the service that Gamcel is delivering is something that makes me very happy,” she stated.

She thanked her staff and managers for their commitment and dedication in delivering quality services to the public in the interest of the Gambian people.

She also thanked the Gambian leader, President Yahya Jammeh, in taking the lead in helping the Gambian people during this month of Ramadan and also in taking Muslims to Mecca.

The President of the Supreme Islamic Council, Alhaji Momodou Lamin Touray, thanked the Almighty Allah for making the event a reality.

He applauded the event, saying it is necessary and worthy of commendation. He thanked Gamcel for the laudable initiative, especially in the Ramadan, which is a month of sharing and caring for Muslims.

He spoke about the need to help Muslims during the month, saying such benevolence is highly of reward by the Almighty Allah.

He also appealed to Gamcel to continue the initiative as “the Almighty Allah would reward” them for the benevolent gesture.

“The presentation of the items at this time of the Ramadan is a worthy cause,” he said, whilst assuring Gamcel that “this is not a small thing and the Gambia Islamic Supreme Council would continue to support Gamcel, as it is the national GSM operator, and by extension wants Gamcel to be a role model”.