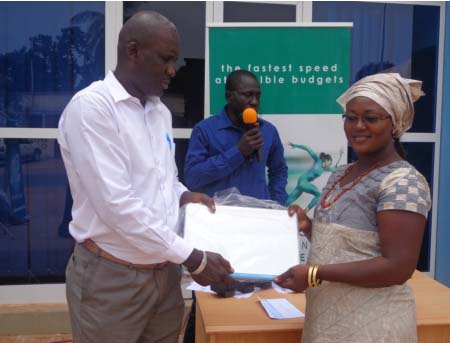 GAMCEL, the national GSM company, last Thursday awarded prizes to their “luckiest predictors” winners. According to GAMCEL officials, winners won by sending an SMS to 1100 to predict the winners in any match at the ongoing World Cup tournament in Brazil.

They were awarded prizes such as mobile phones, a HD laptop, football jerseys, Samsung phone, a polo T-star, a HD decoder, cash, and Gamcel credit for one’s mobile phone.

Speaking at the presentation ceremony, Ma Nyima Cham on behalf of the senior manager Gamcel, thanked all their customers for their contribution toward the success of the company.

She explained that the presentation is a weekly event of Gamcel, since the World Cup started on 12 June and will continue up to the last match of the World Cup.

She urged all customers to continue sending SMS to 1100, since the more SMS sent the more you get the chance to become a winner.

Mariatou Joof, a senior manger customer care at Gamcel, also thanked customers for their loyalty to Gamcel, and urged them to continue partnering with Gamcel, which was the first GSM network in The Gambia. She thanked her co-workers for their support in making this draw a successful one.

A senior manager at Gamcel, one Mr Jatta, said since their campaign started, customers have been responding well in sending SMS, and urged them to continue doing so until the football World Cup ends on 13 July.

On behalf of Ebrima Ceesay, who won a laptop, his wife expressed appreciation to the GSM company, and on behalf of the beneficiaries thanked the management of Gamcel.