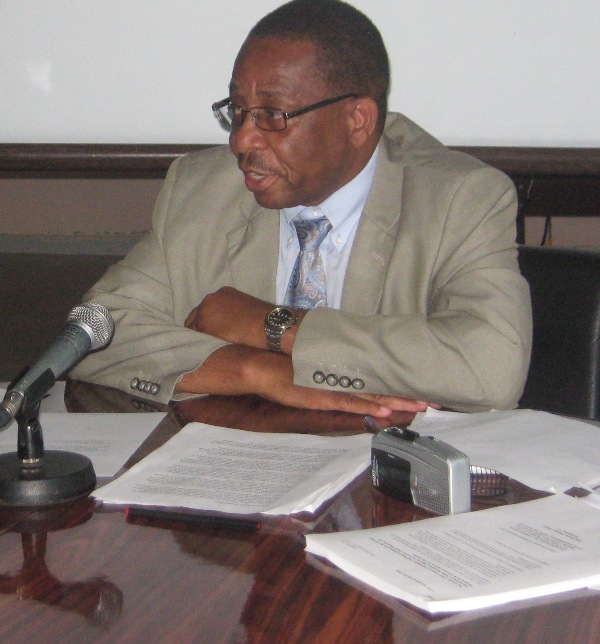 The resident representative of the IMF in The Gambia, Meshack Tunee Tjirongo, has disclosed that despite the challenging global and domestic conditions, the Gambian economy has performed well in recent years.

The IMF officials, who visited The Gambia from 7 to 20 May 2010, made this disclosure at a press briefing held yesterday at the UN House.

The IMF staff team held discussions with officials of The Gambia on the economic development and policies under the context of Article IV of the IMF's article of agreement. Below is the full text of the statement.

Despite challenging global and, by extension, domestic conditions, the Gambian economy has performed well in recent years. Real GDP grew by an average of 6.0 percent a year during 2007-09, up from an average of 3.6 percent during 2004-06.

Even during the global economic crisis in 2009, real GDP growth was strong at 5.6 percent led by a continued rebound in agricultural production, which helped cushion the impact of sharp drops in tourism and remittances from Gambians working abroad.

Throughout this period, inflation was held to low single-digit rates, as the Central Bank of The Gambia generally exercised monetary restraint. In 2009, inflation fell to 2.8 percent. Inflation edged up marginally in early 2010 (4.1 percent in May), but is expected to remain low (about 5 percent) for the year as a whole.

Despite having received extensive debt relief in late 2007, The Gambia still faces a heavy debt burden. As of end-2009, external debt stood at 34 percent of GDP, while total public sector debt was 54 percent of GDP, reflecting substantial - and costly - domestic borrowing. Interest on debt consumed nearly 20 percent of government revenues in 2009, most of which was paid on domestic debt. Moreover, domestic debt consists almost entirely of short-term T-bills, which poses high roll-over risks.

Since late 2008, fiscal performance has deteriorated, which led to more domestic borrowing and upward pressure on T-bill yields. In 2009, the basic fiscal balance was in deficit by nearly 2 percent of GDP - compared to a small surplus targeted in the budget.

Spending overruns, including supplementary expenditures that were not financed by additional revenues or fiscal savings, were the main cause of the fiscal slippage. In the first half of 2010, fiscal performance suffered from revenue shortfalls, while spending was contained within budget limits. In large part, the shortfalls were due to rising world fuel prices that eroded revenues from fuel taxes. In June, fuel prices were raised, which has helped to restore revenues.

The number of banks in The Gambia has doubled (to 14) since 2007, contributing to rapid expansion of much needed financial services. But it has also strained the CBG's resources for banking supervision. Moreover, competition among the high number of banks in relatively small market has added to risks to the banking system, especially in the current environment with weaknesses in key sectors of the economy. This is evidenced in a recent weakening of credit quality, profitability, and capital adequacy.

The Gambia's external current account deficit, excluding official transfers, has widened in recent years. In 2009, a recovery in FDI inflows ? in part due to the entry of foreign banks ? and increased donor grants, together with the SDR allocation more than financed this deficit, allowing a substantial build-up in official reserves to a comfortable level of 6.4 months of imports by end year. In 2010, however, delays in expected disbursements of donors? budget support has weighed on the overall balance of payments.

The Gambia has made impressive progress implementing structural reforms, particularly in the areas of public financial management, debt management, and financial sector development. Good progress has also been achieved toward meeting several of the Millennium Development Goals, most notably in health and education. However, poverty is still widespread.

The Gambia's macroeconomic policies have been supported by an arrangement with the IMF under the Extended Credit Facility (ECF) since February 2007. The program's objectives draw on the strategy Paper which include: (I) macroeconomic stability and effective management of public resources; (ii) pro-poor growth and employment through development of the private sector and (iii) improved provision of basic services. While the performance under the ECF has been broadly satisfactory, recent fiscal slippages have led to the postponement of the seventh review.

Executive Directors noted that the Gambian economy has performed well through the global crisis with relatively strong growth and low inflation, despite a sharp drop in tourism and remittance receipts. Directors observed that the outlook for the economy is generally positive provided a sound macroeconomic policy framework is maintained.

They also stressed the importance of continued progress towards meeting the MDGs and targets on poverty reducing expenditures.

Directors expressed concern about the fiscal slippages over the past year and a half. Further slippages would pose major risks to the economy by increasing the already high cost of domestic debt, especially given the large rollover needs of the mostly short-term debt. Directors therefore welcomed the recent turnaround in the basic fiscal balance and called for continued strengthening of fiscal performance to anchor macroeconomic stability and reduce the debt burden. This could generate significant fiscal savings which could be directed to other spending priorities.

Directors commended the authorities for actively pursuing public financial management reforms. They particularly welcomed the plans for more effective budget procedures and efforts to strengthen execution. Ensuring that the 2011 budget fully covers all ministries and spending agencies would be critical for guarding against spending overruns.

Directors supported recent improvements in debt management and stressed the importance of debt sustainability as the guiding principle for future financing options to address infrastructure needs.

Directors emphasised that healthy central bank balance sheet provides a solid foundation for monetary policy. They welcomed the authorities' commitment to observe statutory limits on government overdrafts. Directors agreed that a floating exchange rate policy has served The Gambia well. They encouraged the authorities to allow the exchange rate to adjust to ensure sustainable external balances and preserve competitiveness.

Directors observed that rapid expansion of the banking system creates opportunities for the economy, but also carries risks. They supported steps to improve bank soundness, notably the timely increase in the minimum capital requirement, and stressed that building capacity in bank supervision should be given high priority.