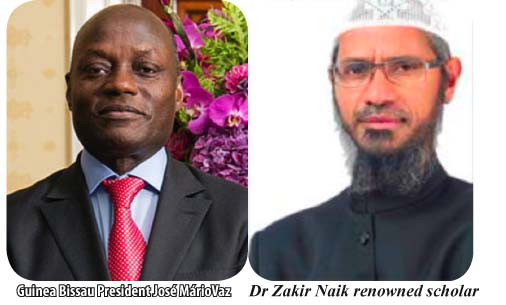 The newly-elected president of Guinea Bissau, Jose Mario Vaz, is due in Banjul today at 4pm to attend the 20th Anniversary celebrations of the July 22nd Revolution.

President Mario Vaz, who took office on 23 June 2014, is visiting the country at the invitation of President Yahya Jammeh.

Born on 10 December 1957, President Vaz is a trained economist who was elected as mayor of the city of Bissau in 2004 before his appointment as Finance Minister in 2009, a position he held until he was elected president of Guinea Bissau in June this year.

Other heads of state are expected from Senegal, Mali, Mauritania and Chad.

Dr Zakir, a regular preacher at Peace TV network, is the president of Islamic Research Foundation in Mumbai.