Gambians in New York under the auspices of the Gambian Youths Organization in New York celebrates the Gambia's 46th independence Anniversary celebration at Sankofa African Restaurant in Bronx New York on Saturday February 19th 2011. The event was very successful as hundreds of Gambian Youths and youths of Gambian Heritage all converged to partake in the celebration marked in Grand Style. The African Dress affair where guests and hosts mostly dressed in Gambian Cultural "Garambubs" and "warambas" danced African traditional music and talked and mingled in African style.

The ceremony featured the kind of settings and celebrated in line with how it's done in Gambia. The occasion started with the singing of the Gambia's National Anthem by all guests and hosts in attendance that respectfully stood on our feet to sing "For the Gambia, Our Homeland..."; followed by the introductory statement by our president Momodou SW Sawaneh who dilated on the organization, her achievements and aims and objectives; before calling on Samba Jawo, the Spokesperson of the organization and main host of the event to give the keynote address. In his short but relevant speech, Spokesperson Jawo reminded Gambians in New York about the history of our Independence; the struggles for independence and how the Gambian Youths Organization is making the celebration in line with the traditions of the Gambia. He thanked everybody in attendance for taking their time to support the Gambian Youths organization and celebrate with us this great day in the annals of the History of the Gambia, when the Duke of York handed the Independence Instrument to former president Jawara at the then McCarthy Square on 18th February 1965. Thus, making the last and smallest British West African Colony Independent.

The Occasion also witnessed Dancing Competitions and a silent fashion show under the auspices of Secretary General Muhammed Jawara where participants competed in Ndaga and Dancehall music to the delight of the audience and secret judges picked best dresses in male and female categories. The Ndaga and Dancehall victors won cash prizes while the best African Dressed male and female winners, second and third places all receive certificates in recognition of their wonderful African outfits. The organization through the Secretary General invited the Gambian Embassy in New York but due to prompt notice; they were not able to attend; its planning was prompt to our side too and we hope next year the embassy would attend when we shall inform them in time.

The Gambia Youths organization is a relief organization for Africans and Gambians in New York who safeguard their cultural heritage and personal well being. During our nine years of existence, we have consistently sponsored students and help needy families both in the Gambia and here in New York. The latest this year is the sponsorship of students, the provision of more hospital beds, wheel chairs and mosquito nets to the people of the Gambia through the Gambia Red Cross Society. To learn more about the organization and her activities; please visit www.thegyo.com 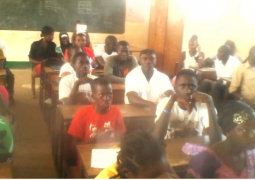