It is not how big a business matters but instead it is the viability and sustainability that matters. It is evident that anybody who wants to venture into business must have the objective to maximize profit, and to be self-reliant to contribute to national development.

Women in The Gambia are found in the centre of struggle in different domains of life: agriculture, entrepreneurship and other domestic errands.

As part of its efforts to sustain women entrepreneurs at community level, the Ministry of Women Affairs under the Office of the Vice-President, in consultation with their development partners recently held a training seminar for Gambian women on entrepreneurial skills development at Paradise Suites Hotel in Kololi. The programme, which targeted women participants across the country, was aimed at capacitating Gambian women engaged in entrepreneurship.

Speaking at the workshop, Fatou Jassey Kuyateh, the Permanent Secretary at the Ministry of Women Affairs under the Office of the Vice-President stated that the Women's Bureau under the Minister for Women Affairs is mandated to implement a project that will enhance the livelihoods of women and girls.

According to Mrs. Jassey-Kuyateh, the Women's Bureau has over the years implemented a series of capacity-building trainings, aimed at enhancing women's effective participation in decision-making.

She further noted that The Gambia's primary development agenda is to reduce poverty and promote sustainable and equitable development, adding that in The Gambia women constitute 51% of the population.

"They are involved in all sectors-formal or informal and are responsible for over 60% of the agricultural labour force and about 90% of the rice and vegetable production. They are the producers of the bulk of the family food," she added.

Permanent Secretary Jassey-Kuyateh further revealed that Gambian women, particularly those at the rural areas, operate mostly at the informal level.

"They lack capacity and the experience to go large-scale or even consolidates their small enterprises", she concluded. 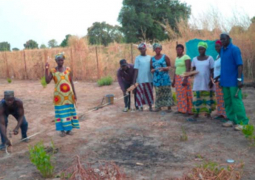