Youths all over the world have been organising themselves and building alliances to speak with one voice and lobby governments' to "Seal the Deal," which aims to build overwhelming support for a comprehensive global climate agreement to take effect after the Kyoto Protocol expires.

World's governments met at the 15th Conference of Parties of the United Nations Climate Change Conference in held from 7 to 19 December 2009.

Young people of the world are most of the times victims of environmental hazards and most recently climate change.

When youths are informed, educated, trained, empowered they can take the leading role in the fight against climate change and environmental hazards affecting them at all levels.

The youths of The Gambia were represented at this submit by Ebrima Dem - National Representative of the Global Unification Gambia Chapter and Ibrahim Ceesay - National Coordinator of the Children for Children Organisation.

In a press briefing Mr. Ebrima Dem said that in recent years the issue of climate change has shifted focus from just an environmental problem to a developmental challenge and the importance of youth participation is crucial in the Cop15. As he put it, young people were the most affected whenever decisions arise from such meeting.

According to him, they are the group that can bring about change and have a say in whatever decision was to be made.

The ’s representatives said that Africa should go to with a common platform: to fight poverty and disaster risk reduction since world leaders failed to sign the fair and ambitious deal.

But they expressed dismay over what they described as after nine hours of direct negotiations from world leaders on the final day, a weak agreement was reached by a diverse group of interests.

Mr. Essa Khan from the Disaster Risk Management Committee said that climate change one way or the other affects the world.

"Developed countries refused to reduce their carbon emission to about 40%, and that was a bone of contention because of the negative impact it will have in their economies.

Disaster risk reduction is a fundamental tool for climate change.

"Disasters happen due to our own decisions e.g. people sitting along water ways sit on harms way," he stated, noting that Disaster Risk Reduction is interrelated with climate change, and that’s what people failed to understand. 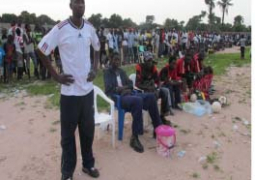