Ms Awa Conateh, a young Gambian fashion designer, who is co-founder and president of the Young Jollof Designer Association, recently returned from the United States under the three-week International Visitors Leadership Programme (IVLP), where she exposed, marketed and promoted Gambian fashion.

The visit of Ms Conateh to the US, facilitated by the US Department of State through its diplomatic mission in The Gambia, enabled her to share experiences and ideas with 19 other participants from other parts of the world.

The IVLP is the U.S. Department of State's premier professional exchange program.  Launched in 1940, the IVLP seeks to build mutual understanding between the U.S. and other nations through carefully designed short-term visits to the U.S. for current and emerging foreign leaders, US Embassy officials said.

Awa is  the co-founder and president of Young Jollof Design Association - a profit-making organization dedicated to fostering young designers and elevating the presence of the Gambian fashion design industry by creating indigenous but global-friendly, relevant clothing and accessories.

Awa told journalists at a press conference held at the American Corner yesterday about her programme experiences in the US, and what she can do for the development of fashion design in The Gambia. She described her three-week stay in the US as memorable, and that she has learnt the success story behind fashion designing in the US.

Awa, who coordinates beauty pageants and fashion shows and won the contract to decorate a 4star hotel in The Gambia, said her passion was to promote Gambian culture and African fashion in general. She described her trip as 'great'.

According to her, she had learnt a lot from the International Visitors Leadership Programme, noting that she concentrated on the creative side and designing making.

"I was given more chances to explore than I thought. The women we met were all women of substance with a great passion," she said.

She told journalists that the trip availed her lots of opportunities that she can explore in the US. "I also visited government offices dealing with women, and how entrepreneur women can improve their business from small to medium," she added.

Awa commended the US Embassy in Banjul, singling out Tula Orum and Ms Zainab O. Jah of the Public Affairs Office for their moral support and encouragement.

Awa was also awarded a certificate of participation upon completing the International Visitors Leadership Program.

Mr. Bernard Gomez, Alumni Coordinator, Gambia International Leadership Programmme (IVLP) Association, told our reporter that since the program started some decades ago, many Gambians have benefited from it.

He also hailed the partnership between his association and the US embassy, noting that sharing experiences and ideas at international level always bears fruit.

His invitation is to all (Part 3)

The Gambia ranks 29th in Africa 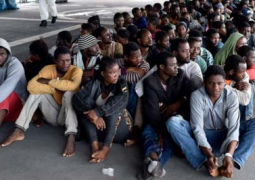