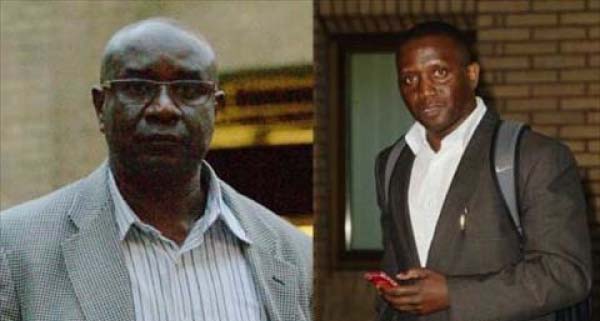 A gang of Gambian diplomats who turned their London embassy into a tax-free tobacconist and avoided paying almost £5 million in tax have been jailed for a total of 33 years.

Yusupha Bojang, 54, the deputy head of the Gambian Diplomatic Mission in Kensington in London, and his colleagues ordered 29 tonnes of rolling tobacco over three years - amounting to more than half a million pouches.

At one point their racket became so large that people were queuing outside the embassy to buy the tobacco.

Bojang and six other members of staff ‘systematically abused’ diplomatic tax exemptions and were caught after the Foreign and Commonwealth Office was alerted to the system being misused.

They decided the vast amounts could not possibly be for personal use and launched a criminal investigation which led the Gambian government to waive the diplomatic immunity of the seven.

A judge branded the tobacco racket a ‘substantial fraud’ and said the diplomats had made ‘every citizen in this country’ losers by committing the deception so they could make large profits.

The gang denied conspiracy to cheat the public revenue but were found guilty after a trial at Southwark Crown Court lasting more than a month.

The court previously heard that the 50g pouches were imported at tax-free rates which were only permissible for goods for personal use or that of the Gambian High Commission.

But the diplomats did not smoke and sold the tobacco from the Mission, a £6 million redbrick town house in west London, while failing to pay £4.8m in VAT and excise duty.

As it became more successful the tobacco racket became even bigger. Later it became so ‘bold’ long queues of customers were seen queuing outside the embassy to buy the tobacco.

During the trial it emerged that demand became so high that members of the gang were ordering tobacco worth more than their annual salary, and so much of it that firm which supplied them couldn’t keep up with demand.

Bojang, who was a senior staff member and considered a ‘father figure’, was the ringleader, but all the diplomats profited from the scam. He was jailed for seven years.

All four diplomats had earlier been found guilty of conspiracy to cheat the revenue.

They all had diplomatic privileges, but these were waived by the Government of Gambia, and they now face deportation after their spells in prison.

Fellow workers Veerahia Ramarajaha, 54, Audrey Leeward, 49, and Hasaintu Noah, 60, were also convicted of aiding the tax fraud and jailed, but none had diplomatic privileges.

He said: ‘In any view this was a substantial fraud on the public purse and the losers are every citizen of this country.

‘Each of you say you were trying simply to help you fellow Gambians. In my judgement that is not just nonsense, it is a downright lie.

‘Each of you made a substantial profit - this was your business.

‘As you felt increasingly confident the orders placed by you in your own names and others connected to the Mission increased dramatically.’

Judge Gledhill said they ordered so much tobacco in such an obvious way that the only conclusion was that they believed they would never be caught.

‘The quantities of tobacco ordered meant that at times the Mission must have looked like a wholesale warehouse, added the judge.

‘There is no doubt in my mind that this was a dishonest business operated on an increasingly large scale.’

He said the four diplomats had committed ‘significant breaches of trust’ given to them by the British and Gambian governments.

‘First, you have breached the trust of the President and people of Gambia,’ added Judge Gledhill.

‘You were each sent to London to represent your country and you were certainly expected, as diplomats, to maintain the highest possible standards of integrity and honesty.

‘Second, the UK was entitled to expect that you would respect and comply with the laws of this country. You have breached that trust as well.’

Fellow embassy workers Veerahia Ramarajaha, 54, Audrey Leeward, 49, and Hasaintu Noah, 60, were convicted of the same offence as the four diplomats.

They were all jailed for three years each.

The court heard the convictions are a ‘tremendous fall from grace’ for the diplomats.

Bojang’s family is in thousands of pounds of debt and face eviction, while his wife works on the checkout at Tesco, the court was told.

Defence lawyers said the diplomats face severe ‘consequences’ if they were deported back to Gambia after their prison sentences.

Dean Armstrong, representing Bojang, said: ‘There is a likelihood that an ability to return to Gambia will be fraught with very serious consequences.

‘There is at least a regime which gives tough penalties to those who transgress.’

Eighth defendant Ida Jeng Njie, who worked in the same building for the Gambian Tourist Authority, was found not guilty of conspiracy to cheat the revenue.

The Diplomatic Mission is now officially known as the Gambian Embassy after the West African nation left the Commonwealth last year.

Mo Dampha, Solictor Advocate at IBB Solicitors, represented the four diplomats. Following the sentencing he said: ‘My clients have accepted what they see as a harsh sentence for the crime that was committed under UK laws.

‘However this case raises important wider international law issues, specifically in relation to diplomatic immunity and when it can and can’t be waived.’