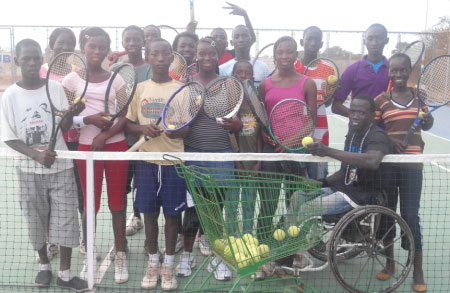 Fashion-conscious Maria Sharapova produced another dazzling performance in her beloved to reach the French Open semi-finals with a crushing 6-0 6-3 win over German Andrea Petkovic on Wednesday.

The Russian seventh seed, who will take on Chinese sixth seed Li Na for a place in Saturday’s final, needs only to lift the Suzanne Lenglen Cup to complete a career grand slam.

“It’s really exciting to be back in the semis here, in general. I put a lot of work in to be in this stage of the grand slams,” Sharapova, who made it to the last four at Roland Garros in 2007, told a news conference.

“I’m really happy that it’s here. I’m going to have a chance to go further.”

Sharapova once again strode on to court with a fancy handbag and she unleashed a devastating display of attacking tennis to leave her opponent flat-footed.

Petkovic did go 40-0 up in the first game but she was brought down to earth in ruthless fashion.

Sharapova, who had not made it into a grand slam semi-final since the 2008 Australian Open, started to spray the court with forehand winners and sealed the opening set in 32 minutes.

Petkovic, who beat Sharapova in the Australian Open fourth round this year, took a bathroom break and came back fighting for her serve, but she dropped it in a 13-minute opening game.