With less than two weeks before the start of the World Youth Athletics Championship, organised by the International Amateur Athletics Federation in Canada from 19th-25th July 2010, Gambian athlete Momodou Lamin Kujabi, who is the country's only representative in the world's biggest youth athletics competition has set his sight firmly on achieving the desired result, as he prepares for the big event.

Kujabi who represented The Gambia in a series of high-profile athletics championship, such as in , , , , , , , , and with some great results to be proud of, said his participation in the Canada Championship came as a result of his outstanding performances in the qualifying stage.

Kujabi, who also won the most outstanding athlete of the year 2009 by the Sports Journalists Association of the last March, told our reporter that the championship will present him with the unique opportunity to be exposed to the highest athletics standards.

He took the opportunity to thank the organisers and the Gambia Athletics Association who will fund his trip for their continuous support. He then assured them of his full commitment at all times.

"I will do my best to bring glory to the nation that always has confidence and trust in me," Kujabi said on Saturday. 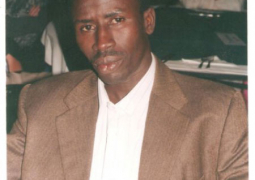