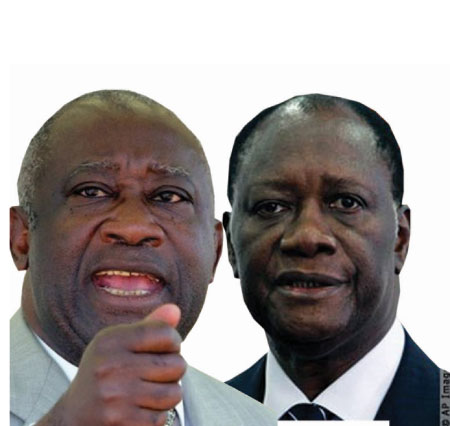 The Government of the Gambia Friday issued a statement on what it said was the recent tragedy in Ivory Coast, making its position clear that it would not recognize any president or government in Africa that has been imposed by forces outside of the African continent for whatever reason.

The statement, read on GRTS by television personality Ardy Fatty, touched on a number of issues including the ongoing mutiny in Burkina Faso led by the army.

In the statement, the Government called on Africans to not only wake up, but stand up to the "new attempts to re-colonize Africa through so-called elections that are organized just to fool the people, since the true verdict of the people would not be respected if it does not go in favour of the Western-backed candidate as has happened in Ivory Coast and elsewhere in Africa".

For the benefit of our readers, we reproduce the full text of the statement verbatim:

Events in Ivory Coast have vindicated us on our earlier assertions that Western neocolonialist sponsored agents in Africa that owe allegiance only to themselves and their Western masters are ready to walk on thousands of dead bodies for the presidency. This is what is happening in Ivory Coast.

Africans should not only wake up but should stand up to the new attempts to re-colonize Africa through so-called elections that are organized just to fool the people since the true verdict of the people would not be respected if it does not go in favour of the Western-backed candidate as has happening in Ivory Coast and elsewhere in Africa.

What is really sinister and dangerous about the neocolonialist threat is that they are ready to use brute force or carryout outrageous massacres to neutralize any form of resistance to the Western selected president as has happened in Cote d’Ivoire.

The reasons for the bombardment of the presidential palace prior to the raid was, according to them, to prevent Gbagbo from using heavy weapons against civilians but both the UN and France were aware of the outrageous massacres of civilians; entire villages that supported president Laurent Gbagbo were wiped out by so-called Republican forces fighting for Ouattara.

Were Gbagbo supporters not supposed to be protected by both the UN and French forces against massacres? These so-called Republican forces that were supposed to be fighting for democracy ended up killing thousands with impunity, and are now engaged in massive looting.

Our position is very clear; the case of Laurent Gbagbo is a replica of the case of Patrice Lumumba, who as a freedom fighter for the dignity and independence of not only the Congolese people but the entire black race, was overthrown by Western powers including the UN and handed over to his sworn enemies to be murdered.

History is repeating itself as the same neocolonial forces that had overthrown Patrice Lumumba, captured him and handed him over to his enemies almost 50 years ago, are the same forces involved in the Ivory Coast with the only difference being that it is now a different former colonial power.

If justice is to be done, there should be an impartial and comprehensive investigation into all the atrocities carried out in Ivory Coast by a team of honest and decent Allah-fearing people. Alassan Ouattara and his forces cannot go scot free and blame everything on President Laurent Gbagbo, who according to the Ivorian constitution is the legitimate president of Ivory Coast.

This team should be selected by the non-aligned movement. One is tempted to ask the question, how is it possible that the verdict of a constitutional council that decided on who won the elections in some Francophone African countries recently were accepted i.e. after the election in Ivory Coast but that of the Ivorian constitutional council was rejected by both the Western powers and the UN.

As far as we are concerned, the only solutions to avert a long drawn-out civil war with all its attendant consequences in Ivory Coast is to reorganize presidential elections in the shortest possible time.

In the meantime, an interim government of national unity should be formed without Alassan Ouattara as he also has a lot to answer for as well. One thing is very clear to all Africans today, the plot to re-colonize Africa is very real and we must stand up to it.

It is shameful that the most evil, dictatorial and repressive powers on earth today are calling African leaders dictators. It also very shocking and interesting as well that the same powers are not saying anything about the popular uprising that has been going on in Burkina Faso for the past three weeks resulting in the storming of a presidential palace in Ouagadougou last night with the whereabouts of President Campaore are unknown.

This uprising has been going on for more than three weeks now, and not a single international news media is reporting on it. Is it possible in today’s world that such an uprising can take place in a country like Burkina Faso, so close to the Ivory Coast, a dusk to dawn curfew imposed for two weeks without the Western media including those of the former colonial master knowing about it?

We the new generation of Africans cannot and will not be fooled. We know what Blaisse Campaore stands for in Africa with regard to the West. Captain Thomas Sankara was murdered for standing up to imperialism and neocolonialism in Burkina Faso in particular and Francophone Africa in general. He was killed for the same reason that Patrice Lumumba and other African freedom fighters died for, their killers eventually became Presidents in those African countries and work exclusively for Western interest in Africa.

Blaisse Campaore is one of them. He has a lot to answer for the civil wars that ravaged Liberia, Sierra Leone and Ivory Coast then and now. That there is such a media blackout of the uprising in Burkina Faso but an up- to-the-minute reporting of events in Yemen, Syria, Ivory Coast etc, shows that the so-called international news media are the mouthpieces of certain Satanic powers with a sinister mission for the rest of the world outside the West. Why can’t the West respect Africa's independence and dignity?

The Gambia Government would not recognize any president or government in Africa that has been imposed by forces outside of the African continent for whatever reason. We know what those governments and Presidents stand for in Africa; they loot African resources on behalf of the powers that brought them to power.

May the Almighty Allah guide, guard and protect Africans by giving us the courage to stand up in the defence of African independence, dignity and protection of our natural resources from those hungry locusts on the rampage in Africa.

The road to total liberation may be tough, but we shall prevail very soon. Inshallah.