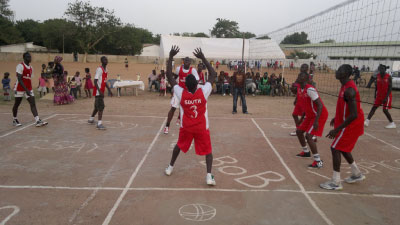 The Gambia U- 20 volleyball team is currently preparing for the upcoming continental Volleyball Championship, to be held in Tunisia, from March 2 to 8, 2013.

According to Musa Casa Taal, president of the Gambia Volleyball Association (GVBA), the team has qualified since December 2012 after taking part in the qualifying round held in Dakar, Senegal, where they were crowned champions to guarantee them a place in the tournament in Tunis.

If the team qualifies from this tournament they will be heading for the Junior World Championship to be held in Mexico, Taal says.

The team has since 14 January 2013 started intensive training, he said, adding that they are now working on logistics, which include air tickets for players and officials, allowances and other materials for players.

Taal called on all stakeholders to support them in this noble course, saying this is the first time The Gambia has reached this stage in volleyball.

He expressed confidence that the team can make it in Tunis by raising the Gambian flag to higher heights.