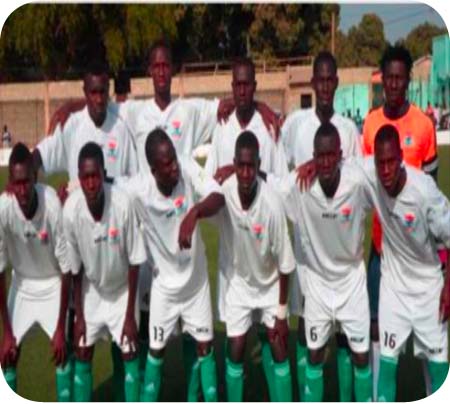 The National Sports Council, NSC, has expressed “total consternation”, following the announcement by the Confederation of African Football, CAF, that The Gambia has been disqualified from the current U-20 football championship, fielding “over-aged players”.

It said it has “formed a task force to investigate the matter, and take appropriate action accordingly”, in a press release dated Monday 21 April.

CAF last week-end informed the football authorities in The Gambia that the U-20 fottball team has been disqualified from further participating in the competition by the organising committee for the Orange Africa U-20 Championship,

“The decision follows a protest by Liberia on some players of The Gambia, during the first leg on Sunday 6 April 2014, which The Gambia won 1-0.

“Indeed, Sampierre Mendy, Buba Sanneh, Bubacarr Trawally, Saloum Fall and Ali Sowe were all born in 1994, and are not qualified to participate in the competition reserved for players born on or after 1 January 1995, as stated in a circular dated 2 September 2013 sent to all member associations of CAF.

“In view of this, Match Number 22 (second leg) Gambia – Liberia scheduled for 25-27 April is cancelled, and Liberia has qualified for the next round”, CAF announced on its web site.

Contacted for comments, Buba ‘Star’ Janneh, first vice president and spokesperson of the Gambia Football Federation (GFF) said he could not comment on the matter.

Janneh added that they received the news on Sunday night, and were “to meet over it as a team, and put their thoughts together and see the way forward as well as to see what next”.

They will make their decision public, with all media houses being duly informed, he further stated.

The GFF held a meeting at Football House on Monday afternoon, and in a news conference following the meeting declared that…

Meanwhile, Kebba Touray, second vice president of the GFF, had earlier defended the use of 1994-born players in the preliminary round of the CAF Youth Championship for Senegal 2015, declaring that they did not violate any regulations.

Speaking to reporters at the Independence Stadium, following a goalless friendly match between the Gambia U-20 and the Senegalese U-20, on April 12, Touray declared:

“We know we are in line with the regulations; in conformity with what CAF has set regarding the U-20 rules as a guideline”.

He went on: “This is a preliminary; you can use 1994-born players because we say U-20 not U-19,” he stated, adding that they know the tournament proper will be held in Senegal in 2015 and whoever qualifies for the tournament will go with 1995-born players.

According to Mr. Touray, following the appeal from Liberia, CAF asked for some Gambian players’ passports, their Gambian identity cards and local club licences, which were scanned and sent to the governing body of African football.

The NSC in its press release dated April 21 said it “condemns the decision of the Gambia Football Federation, GFF, for using over-aged players, which has caused national embarrassment to the country, which could have been avoided”.

The NSC added: “This clearly shows incompetence” of the GFF, according to the NSC, which added that the GFF “were advised in a circular dated September 2nd, 2013 that only players born on 1st January 1995 or after this date are eligible to play in this championship.

“In addition, the GFF was given expert advice 24 hours before The Gambia vs Liberia game played on April 6th, 2014 that they needed to go strictly by the dictates of the CAF circular.

Therefore, the GFF will be expected to take full responsibility for their own judgement and act professionally in such circumstances.

“It is also expected that the owners of football will do the appropriate thing in the interest of the country. The Gambia is definitely bigger than personal sentiments.

“In view of this, the National Sports Council has formed a task force to investigate the matter,, and take appropriate action accordingly”.

Meanwhile, GFF spokesperson Buba ‘Star’ Janneh on Monday announced that they will contest CAF’s decision to disqualify The Gambia’s U-20 team from the championship.

Speaking at a media briefing held at Football House yesterday, after an emergency GFF executive committee meeting, Janneh added that competition regulations were their reference point, when they registered the team as U-20.

He went on to quote Article 29 of the regulations, which state that: “Each national association shall select its national representative team from players enjoying the citizenship of its country, and qualified for selection in conformity with the provisions of article 5 of the regulations governing the application of the FIFA statutes. All players must present, on request to the secretariat of CAF and/or to the commissioner of the match, their valid passport with picture”.

It was on these basis they registered and selected the five players in question, “who are all U-20 as we speak”, he added.

Janneh questioned the CAF regulation which stated Under-20 without specifying a specific age in the regulation, and repeated that, when they registered the team as Under-20, at that time their reference point was the regulation.

It was after Liberia’s protest, then it propped up somewhere that there was a circular which stated that the players must be born 1st January 1995, he revealed.

CAF sent the GFF a formal notice of the Liberian protest on 14 April 2014, with the protest dated 6th April 2014 against the eligibility of Sampierre Mendy, Buba Sanneh, Bubacarr Trawally, Saloum Faal and Ali Sowe.

CAF reminded them of the circular for the Under-20 Championship dated September 2nd 2013, mentioning clearly that only players born on 1st January 1995 or after are eligible to play in the competition, he further noted.

This circular was received and signed for by one Victoria Roberts on behalf of the association (not GFF) on September 5th 2013 at 12:45, he stated; adding that they were elected on the 31st July 2013 at Paradise Suites Hotel, but formally took over from the Normalisation Committee on Saturday 7th September 2013.

If they had received that circular, it would have informed them as to the actual date of birth regulation, he continued, still insisting that their reference point was the regulations.

“Like any competition you go to the regulation; the regulation said Under-20 and never stated any date of 1st January 1995”, he went on, adding that this was why they engaged players who were as old as the Under-20.

The GFF intends to log a counter protest with the CAF, also based on the regulations, according to the GFF official, who again reiterated that the reason they found themselves in this situation is because they did not see the circular, because it arrived before they formally took office.

Like many Gambians, they are “equally in a state of shock”, because of the decision of CAF, he pointed out.