Gambia to rub shoulders with Ivory Coast in qualifiers

The Gambia national U-20 team will rub shoulders with Ivory Coast in the second stage of the 17th Edition of the African U-20 Youth Qualifiers after a goalless draw against Sierra Leone in the return-leg of the qualifying campaign played on Saturday in Freetown, Sierra Leone.

The Baby Scorpions entertained the Shooting Stars to a deserved stalemate result to set the date with Ivory Coast, who dented Tanzania's hope of making their appearance in the Youth Championship with a 2-1 aggregate.

The Gambian side under the guidance of coach Lamin Sarr, despite making a few changes from the previous team that enjoyed a convincing win over Sierra Leone in Banjul a fortnight ago, continued to dominate the match from the start to the end, and in the process held the home team to a stalemate result which saw them going  through to the second stage of the qualifiers, with an impressive 4-1 aggregate.

The Baby Scorpions traveled to Freetown on Wednesday afternoon at the back of a convincing 4-1 win at the expense of the Shooting Stars, who needed a massive 3 goal advantage to have any chance of booking their place in the next stage of the qualifying campaign.

But their hope of any progression was dented by the outstanding Gambian team, who managed to keep hold on to their 4-1 home win in their own backyard two weeks ago to keep their qualification berth alive. 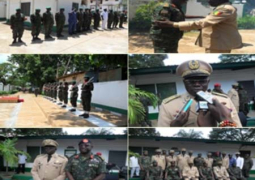