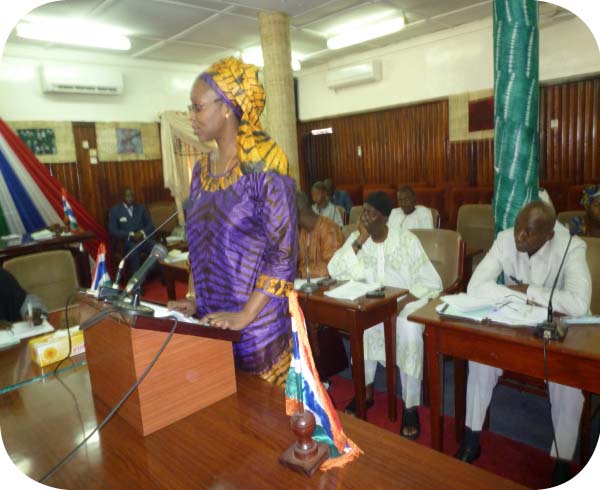 The Gambia is now among countries that have ratified the Swakopmund Protocol on the Protection of Traditional Knowledge and Expressions of Folklore.

The minister of Justice, Mama Fatima Singhateh, on Wednesday presented a motion for ratification of the protocol to the National Assembly, which was adopted by members.

The Justice minister said the protocol was developed by the African Regional Intellectual Organization (ARIPO).

The Justice minister further informed members that in August 2010, ARIPO convened a diplomatic conference in Swakopmund, Nambia, where it adopted the protocol on the protection of traditional knowledge and expressions of folklore.

The Gambia was not represented by a minister who could sign the protocol at that diplomatic conference.

For decades, she went on, Africa’s natural and cultural resources have contributed to the advancement of global art, science and technology.

The growing interest in traditional knowledge, genetic resources, and expressions of folklore has led to cases of misuse, misappropriation and unauthorized exploitation.

The communities that have generated, maintained and transmitted the traditional knowledge and expressions of folklore have received few benefits.

The protocol aims to address these deficiencies by providing the necessary tools to prevent the misappropriation of the traditional and cultural knowledge and heritage of Africa, the Justice minister further explained.

Against this background, “there is an urgent need to accede to this protocol in fulfillment of our obligation as a member state of ARIPO and given the rich cultural heritage and traditional knowledge inherent in our various societies within The Gambia”, she added.

Meanwhile, deputies on Wednesday also ratified the Air Services Agreement between The Gambia and Venezuela.

The motion was tabled Bala Garba Jahumpa, Minister of Transport, Works and Infrastructure, who told deputies that the agreement allows the two countries to establish and operate scheduled air services in each other’s territory.

He added that to make the agreement workable, it provides for “the granting of rights to each of the countries or contracting parties, to establish and operate scheduled international air services through designated airlines that enjoy the right to fly and also make stops in each other’s territory, for the purpose of putting down and taking on international traffic in passengers, cargo and mail”.

It also ensures aviation safety and security, and as such it allows for improved air transport services, which in turn would boost the socio-economic development of the two countries, Jahumpa further informed deputies.
Previous:
GVBA welcomes Olympic House re-opening
Next:
AAITG launches Fourth Country Strategy Paper