The Gambia is among 51 countries registered for the qualifying stages of the 2015 Africa Cup of Nations.

The Confederation of African Football, CAF, yesterday revealed the names of the nations bidding to qualify for the 2015 edition, to take place in Morocco.

The North African nation automatically qualified as host, and only Somalia and Djibouti have opted not to enter the competition.

However, Gambian and indeed African fans would have to wait until April to know which group or pairing they may be in, as CAF now says it has postponed the draw from 31 January to April.

The qualifiers are being sandwiched into a three-month period after the 2014 World Cup, and are divided into a preliminary round and a group stage.

With no competitive match expected for the Scorpions until after the World Cup, The Gambia must therefore find friendly matches to keep the squad prepared for the qualifiers that would be run and over within a three month period.

The GFF must also fix the issue of the coach for the national team, with the contract of Peter Bonu Johnson said to have expired last month.

However, speaking on Afri-radio Monday, GFF number 3 Kebba Touray said his body and the Ministry of Sports which appoints coaches are yet to meet over that issue. 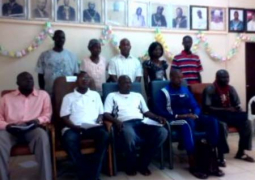