Pollution is a worldwide concern, and The Gambia, because of its location, must be poised to act in concert with other nations, to protect and preserve its marine and seabed products, hence the necessity for us to promulgate appropriate legislation in the matter of marine pollution as well, Francis Litti Mboge, minister of Works, Construction and Infrastructure, has said.

Mboge, who was speaking Monday, at the opening of a three-day national seminar for parliamentarians on the draft merchant shipping and maritime pollution bills, at the Paradise Suites Hotel, opined that the River Gambia is one of the country’s major assets, with resources which can directly or indirectly provide immense wealth and benefits for the nation.

The ultimate purpose of the bills is to provide safety and security in Gambian waters, protection of the marine environment against pollution, protection of the rights of seafarers and creation of a very vibrant shipping industry.

“But for the desired socio-economic benefits to be derived in a sustainable manner, these resources must be exploited in a rational manner and protected from all harmful operations and practices within the territorial sea and inland waters or archipelagic waters of The Gambia,” said Mboge.

To this end, he added, there is an immediate need for an enabling national legislation to regulate all activities in the country’s ports, offshore, or any place within the territorial and marine zones under its jurisdiction so as to deal with any problem or incidence of pollution.

According to him, the existence of an effective maritime transport system, and an up to-date legal regime to ensure that Gambia waters are safe, secured and protected from pollution, in accordance with international laws and practice, are key prerequisites for maximizing the full potentials of our maritime transport and related activities as envisaged in the transport policy.

Alexandra Buabeng, IMO consultant, told the gathering that the IMO has in the past developed a quite a number of protocols, conventions and other instruments.

He stated that the implementation of these laws can never be a success without the appropriate mechanisms being in place.

Also speaking earlier was Samuel Ndure, officer in charge of the GMA, who said the establishment of GMA by an Act of the National Assembly in May 2006 was geared towards regulating the maritime sector.

However, he indicated that without modern laws to replace the outdated legislation currently in place, their work will not be any easier.

He noted that the forum is the latest in a series organized in respect of the relevant draft bills, and that discussion by the law-makers will be of great significance to the maritime fraternity.

Ndure expressed conviction that if enacted and accompanying regulations promulgated, the Merchant Shipping Bill and Maritime Pollutions bills will give the administration the clout to execute its responsibilities as enshrined in the GMA Act. 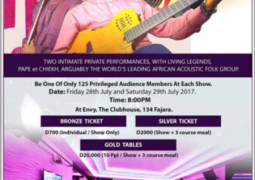