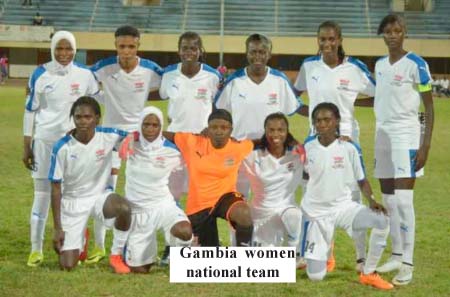 Gambia Female National Football team became the newest addition to the Women’s world ranking, making their debut at 17 in Africa and 113 at the world stage in the latest edition of the FIFA/Coca-Cola Women’s World Ranking released on Friday.

The Gambia’s progress in this year’s women’s world ranking is the country’s best-ever position achieved in her women’s football history, having played five games against officially ranked teams (2 friendlies and 3 competitive) between December 2019 and March 2020.

The latest ranking means the Women’s Scorpions are doing better than 15 other ranked nations in the continent and 46 others globally in Women’s Football.

In September 2018, the Gambia made her first ever admission into the global rankings by FIFA; gaining 30 position in the Confederation of African Football and 158 globally after participating in her maiden continental senior qualifiers.

The Gambia’s rankings came on the heels of her international friendlies with Guinea Bissau in a double-header while a proposed home match to Ethiopia failed to take off after their counterparts turned down the invitation at the eleventh hour.

The outcome of both friendlies were a 1-1 draw in the first leg and a 2 – 1 defeat to the host in the second leg, four days later.

Six months later (18th and 22nd December 2019), both Gambia and Senegal football federations agreed to a maiden Senegambia women’s football friendly but the visiting Gambia team bowed to their neighbours in two defeats in four days.

Two months later, it was a relatively better performance when the team participated in the first edition of the revitalised West African Football Union (WAFU Zone A) Senior Women’s football tournament. The Gambia made a group stage exit after they managed only one win against their familiar opponents Guinea Bissau but lost to Mali in their opener and Liberia in the third encounter.

The Gambia is expected to improve well in her next competitive outing when a new date is announced for the next Africa Women’s Cup of Nations qualifying rounds. The qualifiers were scheduled to start in March 2020 but the Coronavirus outbreak forced CAF to postpone the activity till further notice.