The Gambia is still maintaining the 22nd out of 52 best African countries same as last month, according to the FIFA April rankings release yesterday.

Unlike in the global grading, The Gambia has moved down one step from 92 to 93.

After registering 361 points, which is far lower compared to Africa's number one Egypt, who recorded 967.

Cameroon moved up a step to the 19th position followed by the West African nation, Nigeria in 20th place. Ivory Coast (27th), Algeria (31st) and Ghana (32nd) followed in that order.

Brazil sits at the top of the rankings and ended Spain's five-month reign at the summit. The reigning European champions were pushed to second.

According to FIFA com, this is the seventh time that the Selecao have claimed top spot on the global ladder, a position they held for a total of 142 months since 1993. 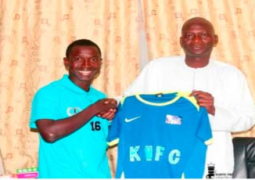