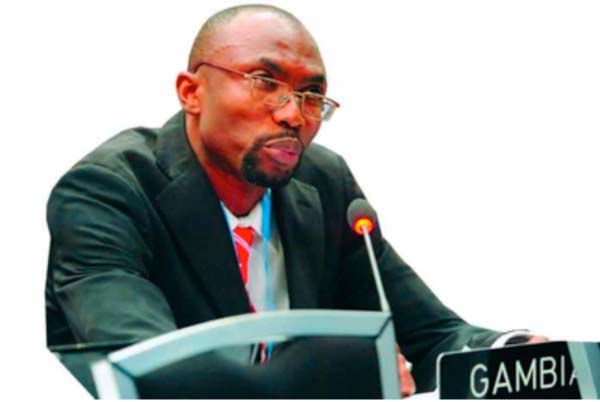 Hon. Pa Ousman Jarju, Minister of Environment, Climate Change, Water, Forestry and Wildlife, has said that it is an undisputed fact that The Gambia’s land resources are at a risk of irreversible degradation under current land management and land use practices.

Minister Jarju made these remarks yesterday at the Baobab Holiday Resort while opening a two-day validation exercise of the National Action Programme to Combat Desertification in The Gambia.

Minister Jarju also said that in addition to the loss of vegetable cover, The Gambia is confronted with the familiar set of problems associated with agriculture and livestock, fisheries, biodiversity and environment degradation, including salt water intrusion into the fresh water zone, soil salinization and erosion, as well as decreasing fertility of the arable land.

The rate of land degradation was further accelerated by rampant bush fires causing denudation of the vegetative cover, he went on.

Globally, an estimated 1.97 billion hectares of all usable land have been affected by various forms of human-induced land degradation, he pointed out.

“The National Action Programmes (NAPs) are comprehensive and nitrated frameworks for addressing the physical, biological and socio-economic aspects of desertification, land degradation and drought (DLDD).”

Sustainable land management, institutional collaboration and cooperation, and the creative sourcing of funds are necessary for addressing DLDD, he said.

The Gambia had been implementing various programmes and projects to combat land degradation since the Sahelien Drought of 1970s.

However, he continued, “the interventions to combat land degradation have largely been a piecemeal approach through individual sector plans and without macro-level policy and strategic perspective.”

The revised NAP, he said, provides an opportunity for the country to take stock of existing measures, and consolidate actions to combat land degradation in a more strategic and holistic manner.

According to Minister Jarju, the main purpose of the review and the alignment of the strategic plan was to promote improved livelihood and reduced poverty through sustainable land management practices.

The minister urged stakeholders to use the validation of the NAP as a wakeup call for appropriate action, to holistically address the challenges and constraints of land degradation and, in particular, to integrate sustainable land management into their sector projects and programmes.