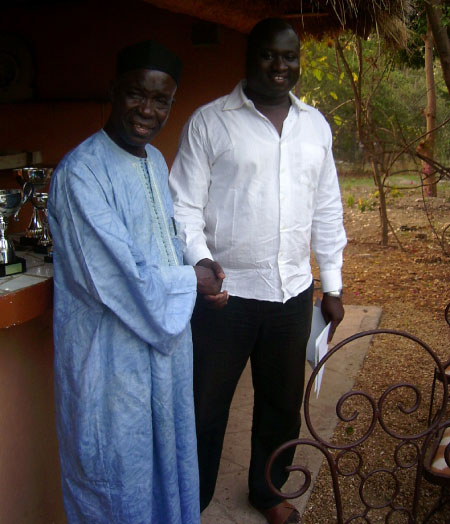 The Gambia Golf Association (GGA) on Wednesday held its annual general meeting at the Greentech Environmental Solutions in Senegambia.

In his statement on the occasion, the president of the GGA, Ebrima Jawara, said The Gambia will be represented for the first time at the International Golf Federation’s Biennial Meeting, to be held in October 2012 in Turkey.

He said the International Golf Federation (IGF) is the only institution recognised by the IOC, being the world governing body for golf during the Olympics.

He added that The Gambia, being a member of the IGF, will have 2 votes at the meeting.

He revealed that the golf game this time around will be their first participation in the IGF’s World Amateur Team Championship, in October 2012, in Turkey and the results of that tournament will have a direct bearing on The Gambia’s chances of qualifying for the 2014 Youth Olympic Games, to be held in Nanjing, China.

The GGA president said they are pretty sure that with the right preparation they will have a team for the 2014 games.

“In May 2012 we had a fruitful meeting with executive members of the Gambia Tourism Board, and tangible proposals for the medium to long term were discussed,” he noted.

In June 2012 they will host the Gambia Open and Pro-Am event, which will run from 26 to 30 June at Fajara Golf Course and will see the participation of professionals and amateurs.

He however revealed that the Gambia National Olympic Committee (GNOC) has been the main sponsor of the event as well as Lady Njaimeh Jawara and Gacem Co Ltd.

Mr Jawara revealed that after the 2012 Gambia Open and Pro Am, they are going to embark on a project that will allow them to critically select the next generation of athletes to represent The Gambia in the game of golf.

Jawara said that one of the GGA professionals will commission 10 practice nets that they will be issued to 5 schools in the Greater Banjul Area and 1 net to a school in each Administrative Region – West Coast Region, Lower River Region, Central River Region, Upper River Region and North Bank Region.

He promised that they will work closely with the relevant authorities in each area and region, adding that by this initiative, they will have fulfilled their decentralization obligations and make golf more readily accessible to more Gambians.

The GGA president thanked the GNOC for giving the GGA much needed moral and financial support and President Jammeh for creating an environment conducive to operate.

For his part, the treasurer of the GGA, Anthony Tabbal, highlighted the previous financial position of the association, covering January through December 2011.

For his part, the president of the GNOC, Alhagie Momodou Dibba, thanked the association and congratulated its members for the good work.

The GNOC president promised the association to do all it could in working collectively with the association in the promotion and development of golf and other sporting events in The Gambia.

At the end of the gathering, certificates were presented to various members, such as the president of the GGA, lady Njaimeh, Anthony Tabbal and others.