The first ever Independence Anniversary Golf Open tournament is billed to take place from 6 to 13 February 2011 at the Fajara Golf Course.

The Gambian leader, President Yahya Jammeh, came up with the idea of having a tournament that will not only further the Game of Golf in The Gambia, but will also form part of the Independence Anniversary Celebrations.

President Jammeh is also the sole sponsor of the tournament, boosting it with USD30,000, according to the Gambia Golf Association’s president Ebrima Jawara. 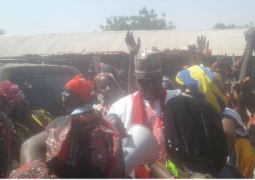