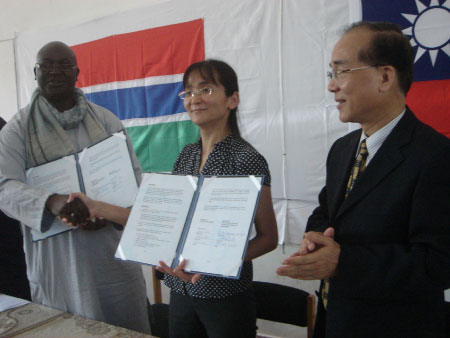 The School of Nursing and Midwifery of the Gambia College yesterday signed a memorandum of understanding (MoU) with Fooyin University based in Taiwan.

The MoU, signed at a ceremony held at the School of Nursing in Banjul, was graced by nursing students and representatives from the two partnering institutions.

Speaking at the signing ceremony, Samuel Chen, Taiwanese ambassador to The Gambia, said it was a pleasure for him on behalf of his government and country to preside over the event.

Fooyin University, he said, is located in South East Taiwan in the city of Kaohsiung and has been in existence since 1958.

He said Taiwan is a development partner to The Gambia and that health is a critical component of two countries’ bilateral corporation.

He revealed that apart from the annual health grant they provide to the country, ROC also sends medical teams to offer free services to Gambians every year and recently they have also launched a new programme on antenatal health in the Upper River Region of the country.

“Just recently 12 nurses and medical practitioners from The Gambia returned from Taiwan after been there for two months,” he said.

He expressed hope that the signing of the MoU between the two schools would boost the relationship between The Gambia and Taiwan.

Professor Muhamadou Kah, vice chancellor of the University of The Gambia and overseer of Gambia College, signed the cooperation agreement on behalf of the college.

He said they value partnership and cooperation thus the reason for the signing of the MoU with Fooyin University.

He urged the nursing students present at the ceremony to take their studies seriously and take advantage of the opportunities the new partnership will provide for them.

She expressed their appreciation about the hospitality accorded her team since their arrival in the country on Monday.

According to her, her university has an enrolment of ten thousand students. She revealed that they would among other things share academic research work and cultural exchange with the School of Nursing.

Beatrice Hafner, head of School of Nursing and Midwifery, Gambia College, while assuring their visiting Taiwanese academicians of their full support, said she hopes the partnership would further strengthen the ties between the two countries.