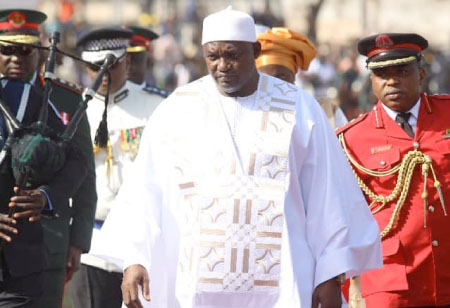 President Adama Barrow has called on Gambians to use the country’s 55th Independence Anniversary as a moment of stocktaking and to unite on issues of national interest and not on partisan conflicts.

Barrow was addressing thousands of Gambians, who thronged McCarthy Square on Tuesday during activities marking the country’s 55th Independence anniversary.

In a more unified independence speech, Barrow further urged Gambians as true sons and daughters of the country to use the moment to reflect on the implications of independence; not only political independence, but also social and economic independence.

“Celebrating the anniversary of this historic event should trigger thoughts to guide us redefine our individual roles as citizens of this nation in order to situate and reposition our motherland better on the global stage,” he said.

Emerging from decades of under-development, slowed progress, retarded growth and dictatorship, Barrow maintained that the time has come for Gambians to reflect objectively and selflessly on what needs to be done differently for better results.

Mr. Barrow reminded that as the country marks the last independence anniversary of this decade, the opportunity has come for citizens to turn a new leaf by beginning the next decade much better, with renewed patriotic zeal in the “third republic.”

He also called on people to demonstrate what independence means to them as they prepare for the next series of national elections.

He continued: “Let us demonstrate that we are capable of managing our own affairs by accommodating our differences, celebrating our successes, providing feedback with discipline, and expressing our opinions with respect and dignity.”

Fertilizer Donated by Taiwan is Timely