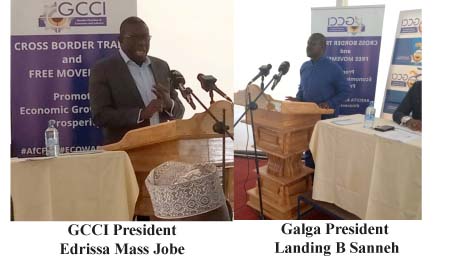 Following the recent donation of 1.6 million dalasis to all the local councils across the country, Landing B. Sanneh said GCCI has demonstrated the highest sense of responsibility and concern for the welfare of the people by supporting local councils to fight the global pandemic.

Out of the 1.6 million dalasis, each council received 200, 000 dalasis; a gesture that Mr. Sanneh said was a clear testimony of the cooperation between GCCI and partners in their fight against the pandemic

Mr. Sanneh, who is also chairman of Mansakonko Area Council said the GCCI leadership is worthy of commendation and emulation, saying its Hope Project is giving hope to Gambians to battle the covid-19 pandemic. “No country can meaningfully and genuinely develop without the involvement of the decentralised sectors like the local government authorities,” he said, calling on the government and private institutions to also play their part in supporting the fight against the pandemic.

“Even before the state of public health emergency declaration, all the councils were proactive. They took their stands at the right time and by extension they were providing information about the virus. They were also providing sanitary facilities and food support to their people most of which were exclusively coming from their treasuries.”

Mr. Sanneh said such pro-activeness is what is needed in The Gambia in which people will actively function in their responsibilities as citizens. He said all funds received will be focused and are only meant for the fight against covid-19.

“This is not a charity but an act of fighting for our survival,” GCCI President Edrissa Mass Jobe said.

He said they were doing this for the people and their communities as businesses that they represent are operating within the communities.

The Liberian example should be commended!